If you're done taking a look at the line-up of guests at Sonam's day wedding, here's what you should catch up on - all the fun from inside the wedding 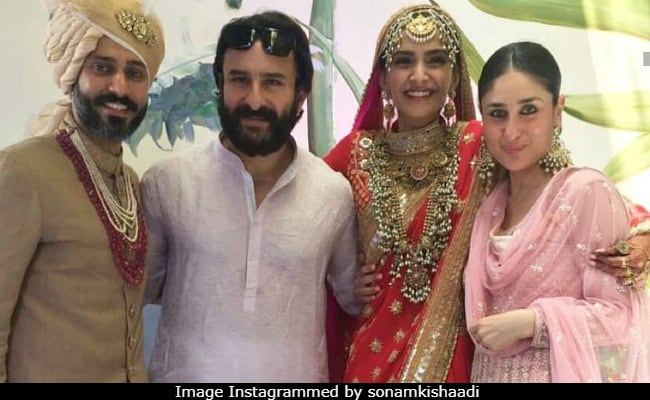 New Delhi: First, congratulations, Sonam Kapoor and Anand Ahuja. Sonam married the Delhi-based entrepreneur in an anand karaj in Mumbai on Tuesday afternoon. From the photos and videos shared by multiple fan clubs and the guests on social media, Sonam's shaadi looked so much fun! Sonam Kapoor di wedding was attended by the likes of Amitabh Bachchan, Aamir Khan, Ranveer Singh, Rani Mukerji, Jacqueline Fernandez, Karan Johar and Sonam's Veere Di Wedding co-stars Kareena Kapoor and Swara Bhasker. If you are done taking a look at the impressive line-up of guests at Sonam Kapoor's day wedding, here's what you should catch up on - all the fun from inside the anand karaj. We have got you covered, here. It's okay, you can thank us later.

We would like to start with big thanks to Karan Johar, upon whom we can always rely for uber-cool inside photos. Here's a look at the "shaadi squad."

Why should girls have all the fun?

How adorable is this?

Well, not just the guests but newly married couple also had quite a bit of fun at their wedding, courtesy Ranveer Singh and Arjun Kapoor.

@arjunkapoor & @ranveersingh pleasing @sonamkapoor & @anandahuja by their rap #maskali Omg that I may experience this. The Gunday brothers are finally reunited after a long time. And as we know them, they always make mood. Very happy!!! Guys you are to funny. Can't stop laughing.. - #sonamakapoor #AnandAhuja #sonamakapoor

One day when they're both old and sitting in their rocking chairs, they'll look back at these scenes and cry tears of joy.... love is truly priceless #sonamakapoor #sonamkishaadi #AnandAhuja #EverydayPhenomenal

The bride with one of the bridesmaids.

Fancy a selfie with Aamir Khan?

Baby Taimur is missing but this is worth a thousand words anyway:

One with Karisma, please:

Mush alert - Senior @sonamkapoor... there is no one quite like you and no one with a bigger heart. You're a lucky man @anandahuja but remember I was here first! Wishing you both a lifetime of happiness and love #EverydayPhenomenal #SonamKiShaadi

A post shared by Harshvardhan Kapoor (@harshvardhankapoor) on May 8, 2018 at 2:51am PDT

A closer look at the venue. Wow.

Promoted
Listen to the latest songs, only on JioSaavn.com
When Rhea Kapoor announced her sister is Sonam Kapoor-Ahuja now:

Sonam Kapoor's wedding celebrations started with a pre-mehendi party on Sunday night and continued with an official mehendi on Monday. The mehendi was stretched into a sangeet, during which Sonam's choodha ceremony also happened. Sonam Kapoor and Anand Ahuja's reception is scheduled for today evening at The Leela in Mumbai.