Actress Mugdha Godse, who is currently holidaying in Sri Lanka with boyfriend Rahul Dev, shared updates about her vacation on Instagram 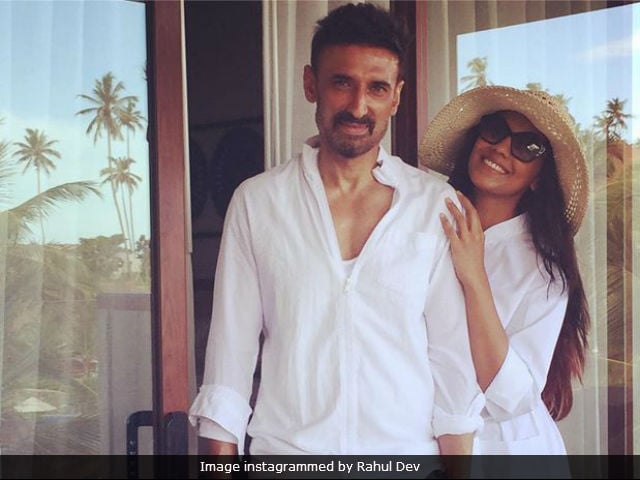 New Delhi: Actress Mugdha Godse, who is currently in Sri Lanka with boyfriend Rahul Dev, seems to be enjoying her vacation a lot in the foreign land. She is sharing adorable and fun pictures from her holiday diaries with Rahul Dev on Instagram, giving her fans and followers major relationship goals. The couple is in Sri Lanka to attend their close friend, actor Aftab Shivdasani's wedding to Nin Dusanj. Recently, the 31-year-old actress posted a cute picture of herself with Rahul, in which she can be seen dressed in yellow ethnic attire while Rahul, who was seen in Bigg Boss 10, looks handsome in a monochrome assortment of clothes. The duo are actually enjoying a stay at the Anantara Peace Haven Tangalle Resort to attend the festivities of Aftab and Nin's wedding. In the caption of one of the pictures, Mugdha wrote: "Beautiful location divine vibe."

The Fashion actress also Instagrammed a picture, where she can be seen 'soaking in sunshine' and in absolute chill mode with her boyfriend.

Promoted
Listen to the latest songs, only on JioSaavn.com
Aftab Shivdasani and Nin Dusanj opted for a simple court marriage in June 2014 and recently while holidaying in Sri Lanka, they decided to renew their wedding vows in a traditional ceremony. Aftab shared a couple of fabulous pictures from their traditional Hindu wedding ceremony on Instagram.

My beloved, words fail to describe my love for you. I couldn't be happier, I thank the Lord everyday for having you in my life. #ninafti #anantarapeacehaven #wedding #eternal #venividiamavi #icameisawiloved #blessed #tangalle #srilanka @troycosta @yoshitacouture

In 1998, Rahul Dev married Reena Dev, who died in 2009 due to a prolonged illness. Later, Rahul started dating the model-actress in 2014. The couple appeared on a TV reality show titled Power Couple together.

Mugdha Godse featured in films like Fashion, Heroine and Will You Marry Me? while Rahul Dev, who is currently filming I'm Not a Terrorist, has also appeared in films like Omkara, Shaapit, Gangster, Ek Paheli Leela and Dishoom.