Aftab Shivdasani posted pictures from his wedding and wrote: "I couldn't be happier, I thank the Lord every day for having you in my life" 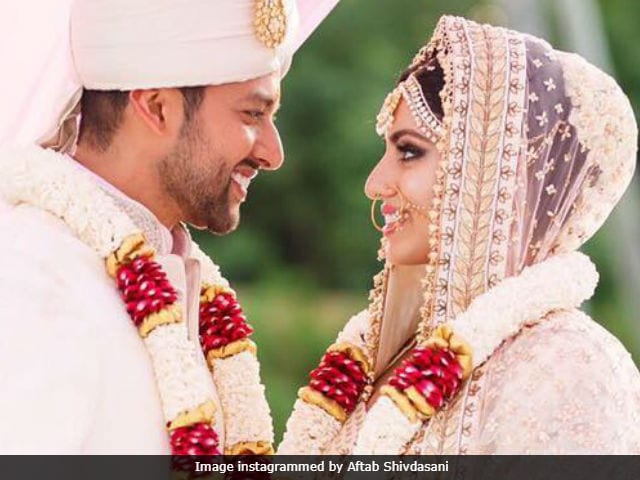 New Delhi: Actor Aftab Shivdasani married Nin Dusanj again and shared a couple of fabulous pictures from their traditional Hindu wedding ceremony on Instagram. Aftab and Nin opted for a simple court marriage in June 2014 and recently while holidaying in Sri Lanka, they decided to renew their wedding vows in a traditional ceremony. On Instagram, Aftab wrote: "My beloved, words fail to describe my love for you. I couldn't be happier, I thank the Lord every day for having you in my life." As for the wedding couture, Nin wore a gorgeous lehenga designed by Yoshita while Aftab wore a sherwani designed by Troy Costa.

My beloved, words fail to describe my love for you. I couldn't be happier, I thank the Lord everyday for having you in my life. #ninafti #anantarapeacehaven #wedding #eternal #venividiamavi #icameisawiloved #blessed #tangalle #srilanka

Here's an Instagram update from Nin's sister Parveen Dusanj, who is married to actor Kabir Bedi.

Promoted
Listen to the latest songs, only on JioSaavn.com
As a child artiste, Aftab Shivdasani featured in films such as Mr. India, Shahenshah, ChaalBaaz and Insaniyat. Aftab made his full-fledged Bollywood debut in 1999 film Mast opposite Urmila Matondkar. Aftab is best known for his portrayal of Prem Chawla in 2004 film Masti and he also featured in the subsequent films in the series, the last of which was Great Grand Masti (2016). Kasoor, Koi Mere Dil Se Poochhe, Awara Paagal Deewana, Deewane Huye Paagal, Bin Bulaye Baraati and Kyaa Kool Hain Hum 3 are among Aftab Shivdasani's other known films.