Inside Kareena Kapoor-Saif Ali Khan's Get-Together With Malaika Arora, Karisma And Others 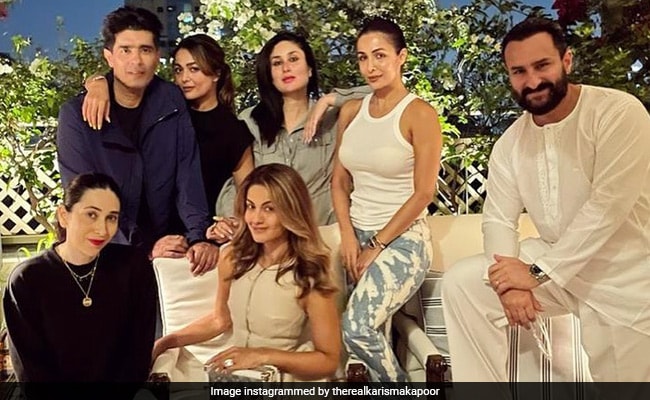 Kareena Kapoor and Saif Ali Khan, who recently welcomed their second child, had a "lovely evening," courtesy their friends and family members on Wednesday. They were visited by Kareena's sister Karisma Kapoor, her BFFs Malaika and Amrita Arora, Natasha Poonawalla and fashion designer Manish Malhotra. Kareena Kapoor, Karisma Kapoor and Amrita Arora are a part of a close-knit friend circle that also includes Amrita's sister Malaika Arora. The quartet have been friends for the longest time and are frequently seen chilling together. Karisma posted a picture from Kareena and Saif's new home and she wrote "Lovely evenings" in her caption.

Kareena Kapoor and Saif Ali Khan welcomed their second child, a baby boy last month. "We have been blessed with a baby boy. Mom and baby are safe and healthy. Thank you to our well-wishers for their love and support," Saif Ali Khan said in a statement. The couple are parents to 4-year-old son named Taimur. After the birth of her baby, Kareena Kapoor shared her first post on Instagram on Monday and she captioned it: "Oh hello there... Missed you all."

Kareena Kapoor and Saif Ali Khan, co-stars of films like Omkara, Agent Vinod and Kurbaan, fell in love during the shooting of the film Tashan. In her piece for Humans Of Bombay, Kareena Kapoor once said, "Somehow through my life, I've been blessed with people who have supported me thoroughly! So just when I thought I was falling, Saif caught me. I'd met him before, but while we were filming Tashan, something changed. I wore my heart on my sleeve! He was so charming; I fell for him hook, line and sinker."