Kapil Sharma and Ginni Chatrath's Canada dairies are all about love 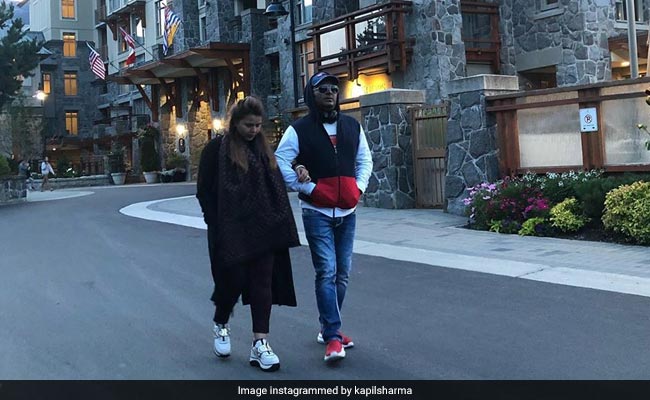 Parents-to-be Kapil Sharma and Ginni Chatrath are making the most of their time in Canada, atleast that's what Kapil Sharma's latest Instagram entry suggests. On Thursday, the comedian shared a loved-up photograph of himself along with his wife Ginni Chatrath on his Instagram profile, in which the couple could be seen walking hand-in-hand on the streets of Canada. In the picture, Kapil could be seen dressed in a bright sweatshirt while Ginni could be seen wearing an all-black outfit. The 38-year-old perfectly summed up the picture in his caption and wrote: "You I in this beautiful world." He added the hashtags #love #whistler #beautifulbritishcolumbia."

Kapil's post received over 6 lakh likes within a few hours. Check out the picture here:

you n I in this beautiful #world #love #whistler #beautifulbritishcolumbia @ginnichatrath

Kapil Sharma and Gini Chatrath, who left for Canada last month, have been actively sharing posts on their Instagram profiles. Take a look at some of the posts here:

How beautiful is this #beautiful #britishcolumbia #nature #naturelovers #love #youandme

The couple, who are expecting their first child together, announced the news of Ginni's pregnancy in an interview with Mumbai Mirror last month. "I just want to take care of my wife and be by her side for now. We are obviously very excited as it's our first kid but my mother is the most excited. She has been waiting for this moment for years now. We are just praying for Ginni and the baby's health," Mumbai Mirror quoted Kapil as saying.

In December 2018, Kapil Sharma and Gini Chatrath got married as per Hindu and Sikh traditions in Jalandhar. The couple's Mumbai reception was attended by some of the biggest stars of the film industry.

Kapil Sharma became a household name after he hosted the comedy show The Kapil Sharma Show. He began his career as an entertainer with The Great Indian Laughter Challenge (season 3). He even featured in the Bollywood film Kis Kisko Pyaar Karoon, which was his debut film as an actor.