Read inOther Languages
This Article is From Nov 25, 2018 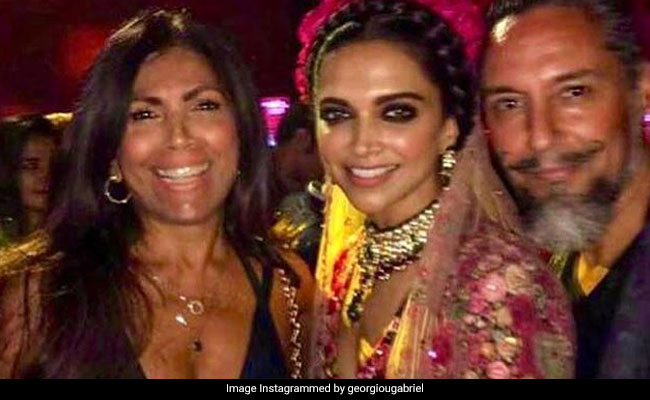 Ranveer Singh and Deepika Padukone let their hair down at last night's party in Mumbai, which was hosted for the newlyweds by the groom's sister Ritika Bhavnani at the Grand Hyatt. While the couple restrained from sharing pictures from the party online, glimpses of the crazy night that was have been shared on social media by some of the guests. Fan clubs have quickly procured the inside pictures and made them go viral as of Sunday morning - while Ranveer features in most photos, Deepika makes seldom appearances. In one of frame, Ranveer and Deepika can be seen setting the dance floor on fire with their epic dance moves. Couple goals, truly! The guest list comprised the couple's team members and closest friends, including Shraddha Kapoor and her brother Siddhanth, casting director Shanoo Sharma and Anshula Kapoor.

For the party, Deepika opted for an embroidered lehenga from Sabyasachi's Kesribai Pannalal collection and styled her look with traditional jewellery. Some pictures on social media also suggested that Deepika later appeared to change into casuals. But it was Ranveer Singh who set the fashion bar high yet again with his party outfit - he picked a piece from designer Manish Arora's collections. As entertainment for guests, there was were hockey tables and other games. Here's how much fun last night's party was.

Shanoo Sharma says: "A match made in paradise," and we completely agree:

A match made in Paradise! @ranveersingh @deepikapadukone

Every girl needs a #hairstylist & this #gorgeous girl has two of us!! @georgiougabriel are we the lucky ones or is she ?? thank you @deepikapadukone for calling us your lifelines I knew a naughty boy since he was 4 yrs old!! watched you boys @natebydesign @ranveersingh @rohanshreshtha @cyrusappoo get into & out of trouble together! Here's to a start of a beautiful phase in your life. Congratulations to you both #deepveer love you both. @anjubhavnani how time flies !! Congratulations to the family too on #deepveerkishaadi !!! #hair #celebrityhairstylist #highlights #beforeandafterhair #haircut #highlights #adfilms #glamorous #stunning #beautiful #caramelhighlights #goldhighlights #shootdairies #bollywood #hairgoals #beauty #hairbyclarabelle #clarabelle #glam

When my friend and one of the best actors in India asks me to make clothes for his wedding party this is what is the result @ranveersingh my love congratulations it's been crazy fun to dress you up yet again and it's just the beginning ! Next should be burning man?;-) #manisharorafashion #manisharora #lifeisbeautiful #ididitmyway #ranveersingh @amrapalijewels @akanksharora @tarang_arora

"Ice hockey and fifa @RanveerOfficial you know how to throw a party ! " #deepveerparty #deepikapadukone #ranveersingh #deepveernews

Ranveer Singh and Deepika Padukone will continue their wedding festivities with a reception party for their industry friends on November 28. The couple are also expected to host another party afterwards on December 1, just a day ahead of Priyanka Chopra and Nick Jonas' reported wedding date. Deepika and Ranveer returned to Mumbai on November 22 on the evening after their Bengaluru reception.

Ranveer and Deepika had flown over to Bengaluru within days of their touch down in India. They returned from their destination wedding in Italy on November 18. Ranveer and Deepika, who dated for six years, had two wedding ceremonies on November 14 and November 15 in Italy's Lake Como in the presence of close friends and family.