"Swipe to see how Masaba forgot the dress-code and tried to make her dress white because she got shouted at but ending up looking like a ghost," wrote Masaba 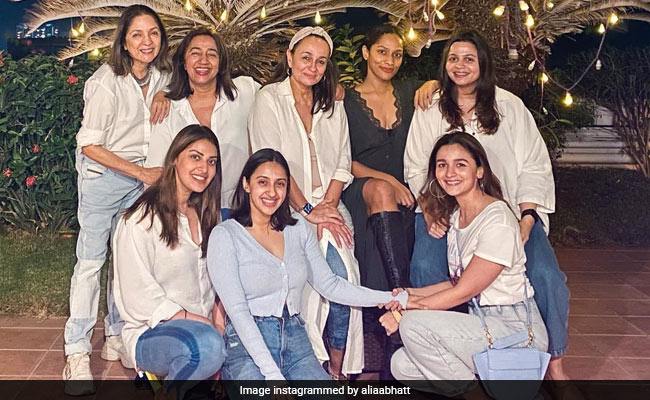 A picture of Bollywood celebrities Soni Razdan, Alia Bhatt, Neena Gupta, Masaba Gupta, Alia's sister Shaheen, and her best friend, Akansha Ranjan Kapoor, Akansha's sister Anusha, and their mother, has been trending on social media big time. They managed take some time of their busy schedules and posted pictures from a mothers and daughters get-together. The dress code for the night was white. However, Neena Gupta'a daughter and fashion designer Masaba Gupta turned up in a black outfit. Posting a picture on Instagram, Alia Bhatt wrote: "The mothers and daughters special."

Meanwhile, Masaba Gupta found a way of fixing her dress code oopsie and she shared it on Instagram. She captioned it: "Swipe to see how Masaba forgot the dress-code and tried to make her dress white because she got shouted at but ending up looking like a ghost. Mommies and daughters."

Alia Bhatt and Shaheen Bhatt are the daughters of filmmaker Mahesh Bhatt and actress Soni Razdan. Shaheen Bhatt is the author of the book I've Never Been (Un)Happier, in which she opened up about dealing with depression. Alia and Soni Razdan shared screen space in the 2018 film Raazi.

Masaba Gupta is the daughter of Neena Gupta and former West Indies cricketer Vivian Richards. The mother-daughter duo featured in the web-series Masaba Masaba, which released on streaming giant Netflix. The semi-fictionalised show is inspired by the lives of Masaba Gupta and her actress-mother Neena Gupta.