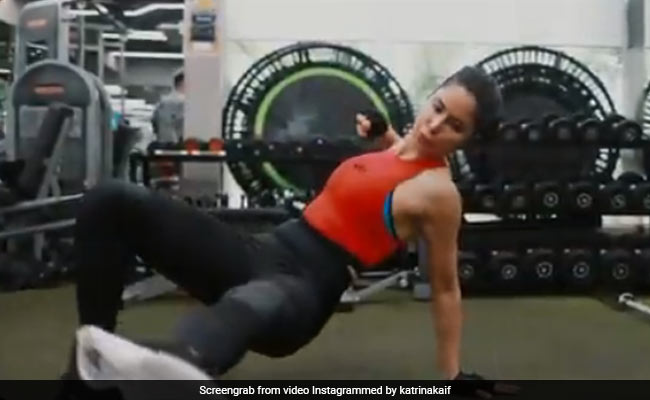 Katrina Kaif in a still from the video. (courtesy: katrinakaif)

It seems Katrina Kaif just borrowed Vicky Kaushal's fitness trainer. Yes, the actress shared a gym video where she is training with the coach, who often features on her rumoured boyfriend's Insta timeline. Katrina is seen trying various workout formats under the guidance of the trainer. The 37-year-old was captured sweating it out in a bright orange crop top paired with yoga pants, and a braid hairstyle. In the caption, she made her intentions clear, "Learning new things, finding my flow, force nothing, let it happen." She also termed it "prep time."

The Tiger Zinda Hai actress did a plethora of exercises from squats, push-ups to leg raises, lunges. Katrina even tried the flow workout. She is seen following her instructor like an obedient student. Don't miss that smile at the end of the clip. Her Phone Bhoot co-star Siddhant Chaturvedi just wrote one word - "Motivation."

We have another pic coming straight from her workout diaries. Here she is looking exhausted but pretty. Posing in a white tank top and knee cap, Katrina revealed her fitness mantra. The caption says, "Eat, sleep, train, repeat." Katrina is currently doing all it takes for her next role. Last month, the actress chopped her hair to get into the look of her character.

Katrina's last release was Bharat, opposite Salman Khan. The film, directed by Ali Abbas Zafar, also features Disha Patani. Her much-awaited film Sooryavanshi will hit the theatres on April 30. Akshay Kumar will be seen playing the titular role. The movie is directed by Rohit Shetty. It will see Ajay Devgn and Ranveer Singh in special appearances.