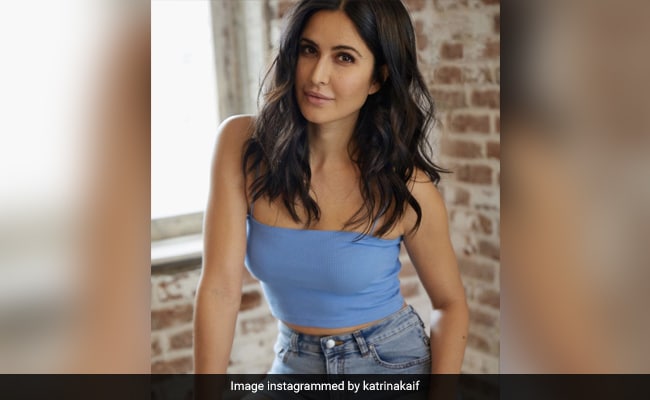 Katrina Kaif is a stunner, irrespective of the look she sports. The actress is all set for a new day and new film and for that, she opted for a brand new look - with chopped hair and beachy waves. The actress, on Thursday morning, shared a stunning picture of herself on her Instagram profile, in which she can be seen dressed in a pair of denims shorts, which she topped with a powder blue crop top. Nobody aces the no-makeup look better than Katrina Kaif and this picture clearly reflects that. "New day, new haircut, new film," she captioned the post. Katrina's sister Isabelle, who is all set make her Bollywood debut, commented "Love it." Katrina did not share much details about the project but we are excited for sure.

A few days ago, Katrina Kaif, who will soon be seen in Rohit Shetty's Sooryavanshi, shared an update on social media and wrote: "And it's coming. Sooryavanshi in cinemas April 30. Aa raha hai storm. Aa rahi hai police. Sooryavanshi releasing worldwide, only in cinemas, on 30th April 2021." The film from Rohit Shetty's cop universe stars Akshay Kumar in the lead role and it also features Ranveer Singh and Ajay Devgn in cameo appearances.

Katrina Kaif  was last seen in Ali Abbas Zafar's 2019 film Bharat, co-starring Salman Khan and Disha Patani. The actress signed a horror comedy titled Phone Bhoot, alongside Ishaan Khatter and Siddhant Chaturvedi. Directed by Gurmmeet Singh, the film will mark Katrina Kaif, Ishaan Khatter and Siddhant Chaturvedi's first film together. It is being backed by Excel Entertainment and is slated to release this year.

Birthday Boy Varun Dhawan Is "The Shirtless Wonder Of Juhu," Writes Arjun Kapoor In His Greeting For The Actor