Is Katrina Kaif Hugging Vicky Kaushal In This Pic? Fans Join The Dots 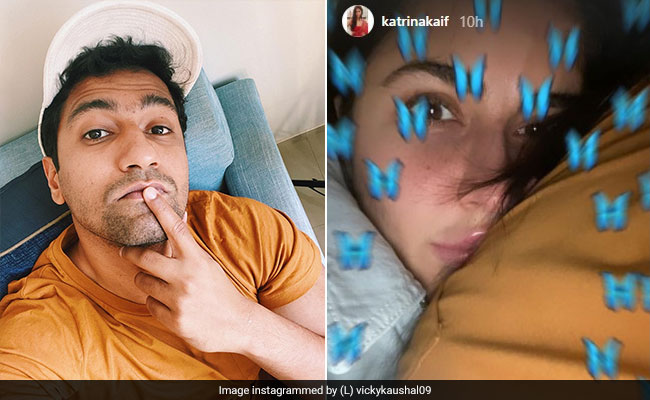 Katrina Kaif and Vicky Kaushal are trending once again, this time for an Instagram story. For the uninitiated, Katrina Kaif and Vicky Kaushal are a rumoured couple now. The 37-year-old actress shared a selfie in one of her Instagram stories recently - Katrina had the butterfly filter on, looked rather sleepy and her head appeared to be resting on someone in a mustard tee. While several of Katrina's followers may have browsed through it, fans of the actress didn't miss out the details. Citing a recent photo of Vicky Kaushal in a similar tee, Katrina's fans began speculating that the actress is hugging her rumoured boyfriend in the photo. For those claiming it could just be a pillow, fans even pointed out a pocket, just like the one on Vicky Kaushal's tee.

Here's what Katrina Kaif shared on her Instagram story. This was enough to get a bunch of excited fans make Katrina and Vicky or "Vickat" trend on Twitter. "When will we see more of them," a comment on an Instagram post shared by a fan-club summed up the general feeling on the Internet.

WHAT TF DID I WAKE UP TO 😭🙌
1st Katrina was spotted wearing his Shirt(whatever it's called)
2nd she "accidentally " posted an Insta Story where you could see Vicky's reflection
And NOW THIS
@vickykaushal09 post a picture of both of you PLEASE#Vickathttps://t.co/M8i4pHoCNApic.twitter.com/qSe2ruDOJq

Katrina Kaif and Vicky Kaushal reportedly started dating sometime in 2019 - that year, Katrina made an appearance on Karan Johar's talk show Koffee With Karan 6, wherein she said that she would "look good with Vicky Kaushal on screen." Vicky Kaushal pretended to mock-faint when he was told about Katrina's statement during the show.

Last year, Katrina Kaif and Vicky Kaushal were spotted hanging out together with Priyanka Chopra and Nick Jonas at Isha Ambani's Holi party. They were also pictured arriving at a few showbiz parties together in Mumbai. Katrina Kaif also attended the special screening of Vicky Kaushal's Bhoot: Part One - The Haunted Ship last year.