The music mogul acquired Big Machine Label Group in a sale that includes the masters for all of of the pop star's records to date. 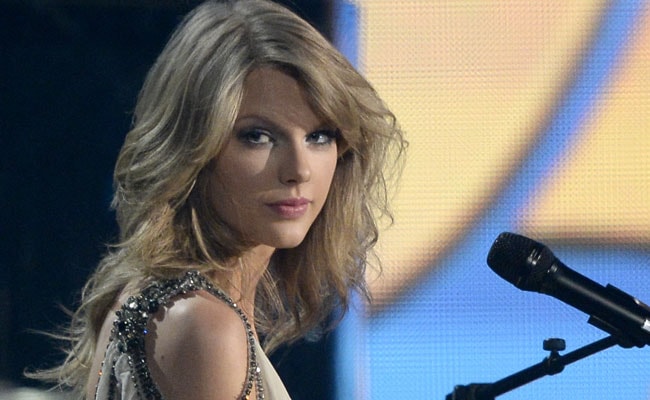 "For years I asked, pleaded for a chance to own my work," said Taylor Swift (Courtesy AFP)

Taylor Swift posted an incendiary note on her Tumblr on Sunday in reaction to the sale of the Big Machine Label Group to music mogul Scooter Braun, calling the news "my worst case scenario."

To Swift, this was more than trade publication fodder. She signed to Scott Borchetta's Big Machine as a teenager and remained with the record label until last year, when she signed to Universal Music Group. As part of her contract, Big Machine owns all of her masters - meaning it owns the rights to her songs - though Swift has made clear her dissatisfaction with the situation.

For a label to own an artist's masters is fairly common in the record industry, but many argue that it strips the artist of control of his or her music. Some labels will later offer recording artists the chance to buy their own catalogue back, a practice Big Machine engaged in, according to Swift.

"For years I asked, pleaded for a chance to own my work. Instead I was given an opportunity to sign back up to Big Machine Records and 'earn' one album back at a time, one for every new one I turned in," Swift wrote on Tumblr. "I walked away because I knew once I signed that contract, Scott Borchetta would sell the label, thereby selling me and my future. I had to make the excruciating choice to leave behind my past. Music I wrote on my bedroom floor and videos I dreamed up and paid for from the money I earned playing in bars, then clubs, then arenas, then stadiums."

The sale of her masters as part of the deal irked Swift, but adding injury to insult is who now owns them: Braun, with whom Swift has been feuding for years. "I learned about Scooter Braun's purchase of my masters as it was announced to the world," Swift wrote. "All I could think about was the incessant, manipulative bullying I've received at his hands for years."

Braun formerly managed Kanye West, who has a rocky history with the pop singer. He infamously interrupted her acceptance speech at the 2009 MTV Video Music Awards to announce that she didn't deserve her award. Years later, he rapped, "I feel like me and Taylor might still have sex/ Why? I made that b---- famous." West's wife, Kim Kardashian West, then publicly released a secretly recorded audio clip in which Swift appears to give the rapper permission for his crass lyric. West also released an accompanying music video for Famous that included naked synthetic bodies of various celebrities together in the same bed, including himself and Swift.

Swift directly referenced some of these incidents in her post. "Kim Kardashian orchestrated an illegally recorded snippet of a phone call to be leaked and then Scooter got his two clients together to bully me online about it," she wrote. She included a screenshot of an Instagram post from Justin Bieber, which featured him on what appears to be a FaceTime call with Kanye West and Braun from 2016 with the caption "Taylor swift what up." The caption has since been deleted. 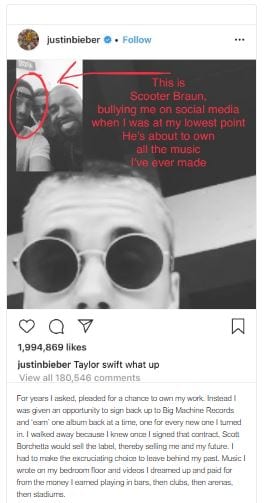 Bieber posted an apology on Instagram on Sunday for the "hurtful" and "distasteful" post three years prior, but defended Braun, his manager, whose character he said had been defamed. "Scooter has had your back since the days you graciously let me open for you," Bieber wrote.

Hey Taylor. First of all i would like to apologize for posting that hurtful instagram post, at the time i thought it was funny but looking back it was distasteful and insensitive.. I have to be honest though it was my caption and post that I screenshoted of scooter and Kanye that said "taylor swift what up" he didnt have anything to do with it and it wasnt even a part of the conversation in all actuality he was the person who told me not to joke like that.. Scooter has had your back since the days you graciously let me open up for you.! As the years have passed we haven't crossed paths and gotten to communicate our differences, hurts or frustrations. So for you to take it to social media and get people to hate on scooter isn't fair. What were you trying to accomplish by posting that blog? seems to me like it was to get sympathy u also knew that in posting that your fans would go and bully scooter. Anyway, One thing i know is both scooter and i love you. I feel like the only way to resolve conflict is through communication. So banter back and fourth online i dont believe solves anything. I'm sure Scooter and i would love to talk to you and resolve any conflict, pain or or any feelings that need to be addressed. Neither scooter or i have anything negative to say about you we truly want the best for you. I usually don't rebuttal things like this but when you try and deface someone i loves character thats crossing a line..

In her post, Swift directs her ire to Borchetta in particular for the sale.

"When I left my masters in Scott's hands, I made peace with the fact that eventually he would sell them. Never in my worst nightmares did I imagine the buyer would be Scooter," she wrote. "Any time Scott Borchetta has heard the words 'Scooter Braun' escape my lips, it was when I was either crying or trying not to. He knew what he was doing; they both did. Controlling a woman who didn't want to be associated with them. In perpetuity. That means forever."

Braun has not publicly responded to Swift's post, but his wife, Yael Cohen Braun, posted a statement on Instagram that alluded to Swift being a bully and said the pop singer did know about the Big Machine sale. "Your dad is a shareholder and was notified, and Borchetta personally told you before this came out. So no, you didn't find out with the world."

In recent years, Swift has become something of an activist on behalf of recording artists. She withheld "1989" from Apple Music in 2015, citing dissatisfaction with how the organization compensates artists when customers with trial subscriptions stream music.

"I'm sure you are aware that Apple Music will be offering a free 3 month trial to anyone who signs up for the service," she wrote at the time. "I'm not sure you know that Apple Music will not be paying writers, producers, or artists for those three months. I find it to be shocking, disappointing, and completely unlike this historically progressive and generous company."

The year before, she had written an op-ed for The Wall Street Journal that railed against streaming services for not paying artists what she deemed a fair share.

Swift closed her note Sunday with praise for her new label.

"Thankfully, I am now signed to a label that believes I should own anything I create," she wrote. "Thankfully, I left my past in Scott's hands and not my future. And hopefully, young artists or kids with musical dreams will read this and learn about how to better protect themselves in a negotiation. You deserve to own the art you make."

She signed the note "sad and grossed out" with a broken heart emoji.

(Except for the headline, this story has not been edited by NDTV staff and is published from a syndicated feed.)
Comments
taylor swiftScooter Braun