"If 'friends' share masks, it all becomes a 'moo point'," read the tweet shared by Mumbai Police 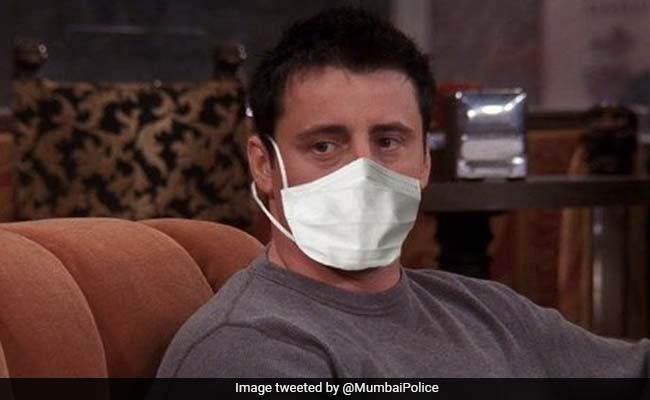 Any fan who swears by popular TV show F.R.I.E.N.D.S, would be well-aware of the fact that Joey Tribbiani doesn't share food, no matter what. The reason we brought this up today is because Joey Tribbiani recently featured in a tweet shared by Mumbai Police and it has something to do with sharing. Mumbai Police shared an edited picture of the much-loved F.R.I.E.N.D.S character Joey, in which he can be seen wearing a mask and the caption on the meme reads: "Joey doesn't share masks. (we bet you read that in Matt LeBlanc's voice)." The text along with the meme read, "If 'friends' share masks, it all becomes a 'moo point.' #JoeyDoesntShareMasks, #TakingOnCorona."

Well, there are multiple times in the show when Matt LeBlanc aka Joey says the popular dialogue but the meme shared by Mumbai Police happens to be from episode 9 of season 10, when Phoebe (Lisa Kudrow) asked Joey if he will call her friend Sarah after their date and he refuses because she took some fries from his plate and as we all know, Joey doesn't share food.

If 'friends' share masks, it all becomes a 'moo point!'#JoeyDoesntShareMasks#TakingOnCoronapic.twitter.com/v39hu6vvK9

This is not the first time that Mumbai Police made a F.R.I.E.N.D.S reference in their tweets. Earlier this year, they posted a tweet, in which Monica and Chandler could be seen wearing masks and the caption on it was an altered version of the line "Hi, I'm Chandler. I make jokes when I'm uncomfortable." It read: "Hi I'm Chandler! I wear a mask when I am going out." Mumbai Police, along with the meme, tweeted: "The kind of friends for keeps! #FriendsOfSafety."

The kind of 'Friends' for keeps! #FriendsOfSafetypic.twitter.com/bGDPUJrK8l

F.R.I.E.N.D.S, which first aired in 1994 and ran for 10 superhit seasons, is deeply embedded in our cultural consciousness. It followed the lives of six friends living in New York as they navigated personal and professional joys and tribulations, much of it converging around a coffee shop named Central Perk.

F.R.I.E.N.D.S made stars of its six principal actors - Jennifer Aniston as Rachel, Courteney Cox as Monica, Lisa Kudrow as Phoebe, David Schwimmer as Ross, Matthew Perry as Chandler and Matt Leblanc as Joey.