Only Mumbai Police Can Get Chandler Bing To Give Good Advice. Here's Proof

These are the kind of F.R.I.E.N.D.S we all need 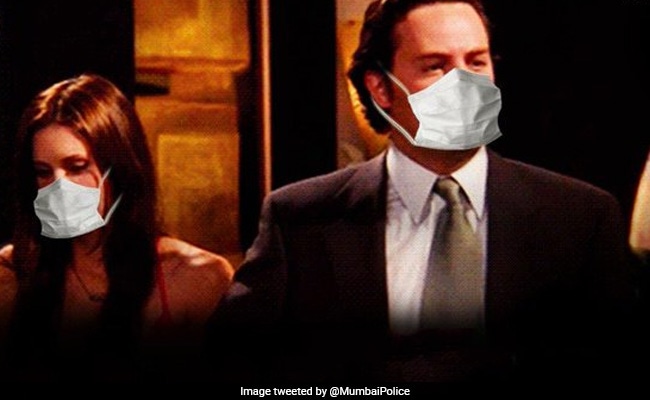 So no one told you life was going to be this way....Chandler Bing would have to wear a mask every day. These tweaked lyrics from the F.R.I.E.N.D.S title track would make so much sense if the show was based in 2020. The reason we brought this up today is because Mumbai Police's Twitter handle, known for its quirky posts, added another one to its list by making a F.R.I.E.N.D.S reference. On Thursday, Mumbai Police posted a tweet featuring two of the most loved F.R.I.E.N.D.S characters - Monica Geller and Chandler Bing, to share an important message. In the tweet, Monica and Chandler can be seen wearing masks and the caption on it was an altered version of the line "Hi, I'm Chandler. I make jokes when I'm uncomfortable." It read: "Hi I'm Chandler! I wear a mask when I am going out." Mumbai Police, along with the meme, tweeted: "The kind of friends for keeps! #FriendsOfSafety."

To put everything into perspective, Chandler Bing, who might be bad at giving advice (by his own admission) made an exception by asking people to wear masks every time they step out. The dialogue came in the show when Chandler bumped into Monica's ex-boyfriend Richard Burke, who was an ophthalmologist and a close friend of the Gellers. Anyway, check out the tweet:

The kind of 'Friends' for keeps! #FriendsOfSafetypic.twitter.com/bGDPUJrK8l

F.R.I.E.N.D.S is undoubtedly one of the most popular sitcoms ever. The show first aired in 1994 and ran for 10 superhit seasons. It made stars of its six principal actors - Jennifer Aniston as Rachel, Courteney Cox as Monica, Lisa Kudrow as Phoebe, David Schwimmer as Ross, Matthew Perry as Chandler and Matt Leblanc as Joey. The sitcom followed the lives of six friends living in New York as they navigated personal and professional joys and tribulations, much of it converging around a coffee shop named Central Perk.