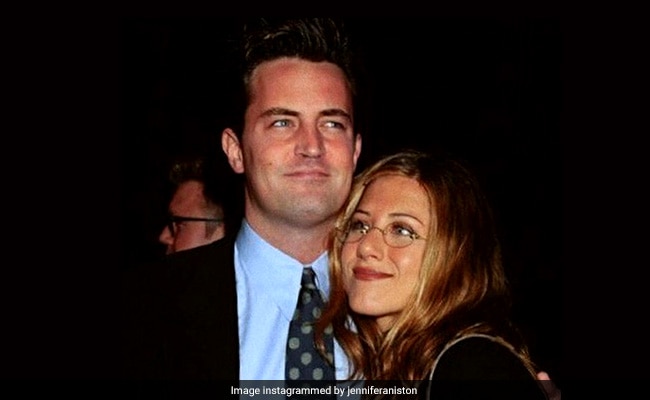 The F.R.I.E.N.D.S family is now complete on Instagram. Matthew Perry, who is known for playing hilarious Chandler Bing on the iconic TV series, finally made his Instagram debut on Thursday, meaning all six F.R.I.E.N.D.S stars are now on the social media platform. Welcoming her co-star to Instagram with open arms, Jennifer Aniston, who herself broke the Instagram over three months ago by joining it, shared an album that will make any F.R.I.E.N.D.S fan nostalgic. Jennifer's album comprised a throwback photo with Matthew Perry and a video, which is from an episode from the season four of the beloved series. "I'm shocked Matty is the last to join Instagram, considering he was a uh... umm... oh crap. Oh! A computer processing transponster," she wrote, making a reference to the season 4 episode where Rachel tries to identify Chandler's profession and end up losing the apartment, in which she was living with Monica (Courteney Cox), after she incorrectly guesses his job.

The throwback video shows Rachel and Monica competing against Chandler and Joey (Matt LeBlanc) in a lightning round and Ross (David Schwimmer) asking the final question, "What is Chandler Bing's job?" Unable to remember his job, Monica says: "'It has something to do with transponding" and that's when Rachel answers: "Oh, oh! He's a transponster!" Monica immediately shouts: "'That's not even a word!"

Check it out (swipe to see the video):

I'm shocked Matty is the last to join Instagram, considering he was a uh... umm....oh crap Oh! A computer processing TRANSPONSTER. #FBF

Needless to say, Matthew Perry is "thrilled" to make his Instagram debut. The 50-year-old actor sent the Internet into a tizzy on Friday after he shared his first post, which is a GIF of Chandler Bing dancing in his own epic way. ""This is how thrilled I am to finally be on Instagram," wrote Matthew. The actor, who is now one post old, has already picked 3.7 million followers on Instagram.

This is how thrilled I am to finally be on Instagram. So, here we go...

Lisa Kudrow, who played Phoebe Buffay on F.R.I.E.N.D.S, also welcomed Matthew Perry to Instagram by making a reference to the show. She shared a throwback photo of herself and Matthew and wrote: "Finally! Yay! Can't believe my eyes, my eyes. Welcome to Instagram."

"Yay Matty! Could you take any longer?" Jennifer Aniston commented on her post while Courteney Cox wrote, "Yes Matty!"

A screenshot of Jennifer and Courteney's comments on Lisa Kudrow's post.

Before Matthew Perry joined Instagram, we used to get glimpses of him chilling out with his F.R.I.E.N.D.S co-stars on Jennifer, Courteney Cox's social media profile.

Guess who I had lunch with today....I KNOW!! Could I BE any happier? #realfriends

F.R.I.E.N.D.S is one of the most popular sitcoms. The show first aired in the year 1994 and ran for 10 seasons. Even after 25 years, it's still a hit on streaming platforms, including Netflix.