Jennifer Aniston Makes Instagram Debut With This 'F.R.I.E.N.D.S' Pic. Could We Be More Happy? 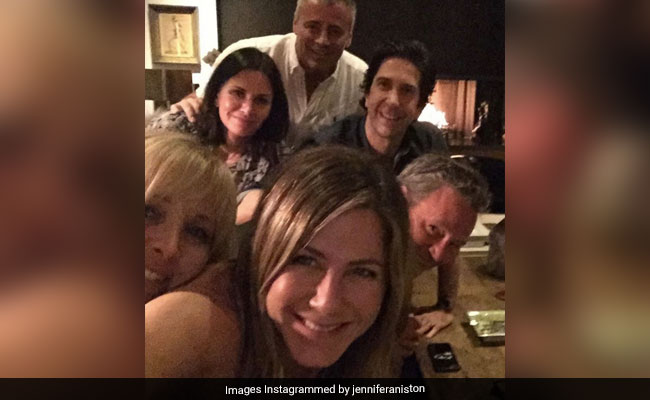 Jennifer Aniston with the cast of F.R.I.E.N.D.S.(Image courtesy: jenniferaniston)

Hey folks! Look who just made her Instagram debut. It is none another than Jennifer Aniston. The 50-year-old actress could not have chosen a better picture to post as her first Instagram entry. Why, you ask? Well Jennifer's first post features her F.R.I.EN.D.S co-stars Lisa Kudrow, Courteney Cox, Matthew Perry, David Schwimmer and Matt LeBlanc. Isn't that amazing? The selfie is slightly blurry but we can't overlook the fact that it features our favourite stars in a single frame. On Tuesday, the Horrible Bosses actress shared the selfie with her 167,000 followers on the photograph sharing application, of which over 12 lakh fans liked it. TBH, we are not surprised at all, keeping into consideration the actress' massive popularity all over the world.

If you thought Jennifer's picture was interesting, wait till you read her caption on the post. The actress wrote: "And now we're Instagram FRIENDS too. Hi Instagram." Without much ado, check out the picture here:

Jennifer Aniston became a household name after she featured in the popular sitcom F.R.I.E.N.D.S, in which she played the role of Rachel Green. F.R.I.E.N.D.S is arguably one of the popular sitcoms ever. The show showcases the story of six friends - Monica Geller (Courteney Cox), Rachel Green(Jennifer Aniston), Ross Geller (David Schwimmer), Joey Tribbiani (Matt LeBlanc), Chandler Bing(Matthew Perry) and Phoebe Buffay (Lisa Kudrow) - staying in Manhattan, who try to deal with everyday issues.

Other than F.R.I.E.N.D.S, Jennifer Aniston has featured in several romcoms such as We're The Millers, The Object of My Affection, Just Go With It, Along Came Polly, Love Happens and She's Funny Like That among many others.