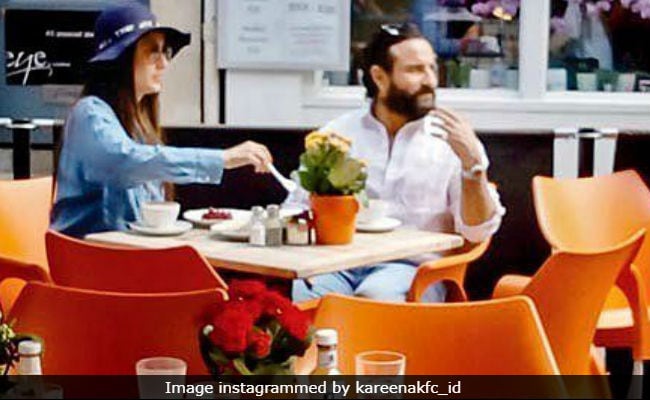 New Delhi: After the release of Veere Di Wedding, Kareena deserved a break - therefore, London. After celebrating her co-Veere Sonam Kapoor's birthday (on June 9) with Rhea and Arjun Kapoor, Kareena extended her London trip and was recently spotted chilling with her husband Saif Ali Khan outside a restaurant. Kareena, dressed in a blue shirt accessorised with a summer hat and sunglasses, was busy with the cutlery while Saif, in white shirt and denims combo, looked around. Saif and Kareena are travelling with their one-year-old son Taimur, who was not seen in this picture. However, in an earlier viral photo, Taimur appeared to be enjoying sightseeing in London while seated on a stroller.

But first, take a look at Kareena and Saif's latest picture from London:

A post shared by KareenaKapoorFCIndonesia_KKFCI (@kareenakfc_id) on Jun 11, 2018 at 2:13pm PDT

Here's the aforementioned picture including Taimur:

A post shared by KareenaKapoorFCIndonesia_KKFCI (@kareenakfc_id) on Jun 9, 2018 at 6:19am PDT

Promoted
Listen to the latest songs, only on JioSaavn.com
In several interviews she gave during the promotion of Veere Di Wedding, Kareena Kapoor made it clear that Taimur remains her top priority and thus she'll make one film a year. Now that Veere Di Wedding is over, Kareena said that she'll begin her next project - she did not give away the details though - later this year or in January 2019.

Kareena said that she and Saif have decided to divide their work in a way which will ensure that Taimur gets the attention of at least one parent at all times. As of now, Saif Ali Khan is gearing up for the release of Netflix web-series The Sacred Games while he awaits the release of Gauravv K Chawla's Baazaar. Saif is also making a film with director Navedeep Singh.