"In between shots," wrote Ayushmann Khurrana 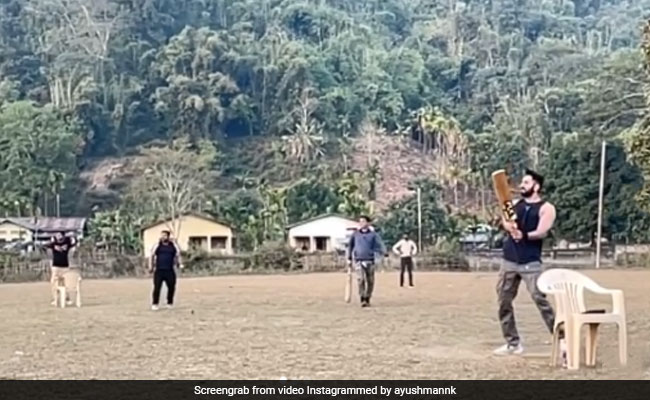 Ayushmann Khurrana in a still from the video. (courtesy ayushmannk)

Ayushmann Khurrana, who is currently shooting for a project in Assam, shared a video from a fun session on his Instagram profile on Thursday morning. The actor was busy playing cricket with the crew in between shots and he did a pretty good job. The actor was seen playing with makeshift stumps (read chair as wicket substitute). The crowd could be seen cheering for the actor as he hit the ball out of the park. The actor captioned the video: "In between shots." He added the hashtag #NorthEast. BTW, he had the cutest cheer squad. A large group of local kids could be seen cheering for Ayushmann in the video. The actor, who was at the Kaziranga National Park, Assam, posted snippets in the form of pictures on his Instagram profile.

Ayushmann Khurrana frequently channels his inner poet and writer and shares posts on his social media profiles. See some of his posts shared on Instagram here:

Ayushmann, who made his Bollywood debut with Shoojit Sircar's Vicky Donor in 2012, is best-known for starring in films like Badhaai Ho, Dream Girl, Bala, Article 15, Dum Laga Ke Haisha and Bareilly Ki Barfi among others. The actor received a National Film Award for Best Actor for his performance in the 2018 film AndhaDhun.