Arjun and Ranveer are really close buddies with the latter accused of "gate-crashing" Arjun's work commitments and much more. 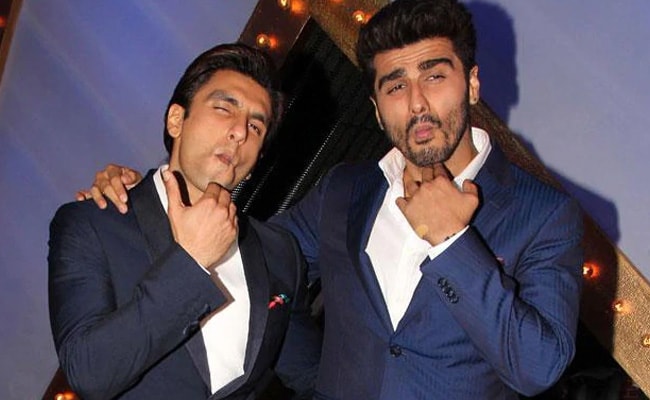 Gunday Arjun and Ranveer together in Mumbai

This story is about Arjun Kapoor and Ranveer Singh's bromance. In a recent interview with mid-day, the Panipat actor was asked about his rapport with his Gunday counterpart Ranveer Singh, when he came up with a hilarious response. From Arjun's reply to mid-day, it appears that Arjun and Ranveer are really close buddies with the latter accused of "gate-crashing" Arjun's work commitments and much more. Talking about if his rapport with Ranveer has changed over the years, Arjun told mid-day: "He still gate-crashes my dubbing, sends long voice messages after watching my songs and kisses me on the cheeks. Our connection remains unaffected" and hilariously added what he tells Deepika Padukone about it: "I tell Deepika that I am her souten. We have been consistently warm."

In his interaction with mid-day, Arjun was also asked if he sought help from Ranveer, who has starred in several Sanjay Leela Bhansali-directed historical dramas like Ram-Leela, Bajirao Mastani and Padmaavat, about fine-tuning his performance as Sadashiv Rao Bhau in Ashutosh Gowariker's upcoming period piece Panipat, when he said: "Ashu sir and Sanjay sir make magnum opuses, but they have different temperaments. Here, I respected my director's temperament. I wanted to remain loyal to my story. Ranveer would have given me his point of view Sanjay sir's understanding. I have tremendous respect for Ranveer's work. But this film didn't require me (to seek his advice) because Bajirao and Sadashiv are from different eras."

Meanwhile, glimpses of Ranveer and Arjun's bromance are aplenty on social media. Arjun is usually always the first celeb to comment on Ranveer's ROFL posts. Arjun, who refers to Ranveer as "Baba", once termed him as a "good looking stud." More recently, on Ranveer's "entertainer for hire" post, Arjun wrote: "Baba, you are so cheap, it's expensive." 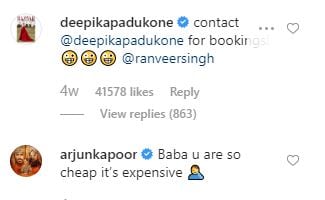 Ranveer Singh and Deepika Padukone celebrated their first wedding anniversary earlier this month. The couple will be seen together in sports drama '83 next, which releases on April 10, 2020. 2014's Gunday remains Arjun and Ranveer's only film so far. Ranveer featured in a cameo in Arjun and Deepika's film Finding Fanny the same year.