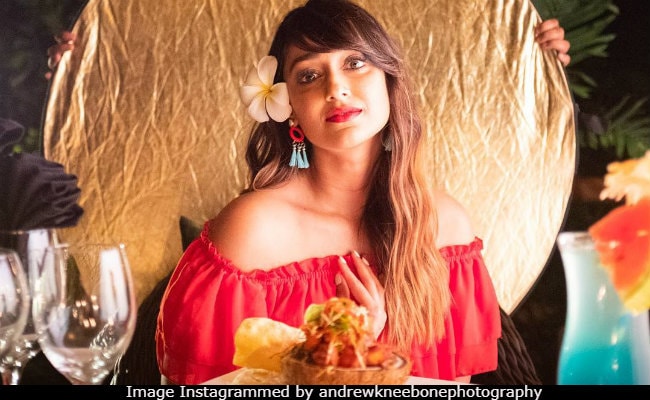 Here's Ileana, all the way from Fiji (courtesy andrewkneebonephotography)

New Delhi: Guess who's in Fiji, chilling in the sparkling sea water and soaking up the sun? Actress Ileana D'Cruz and her boyfriend Andrew Kneebone are having the time of their lives in the island retreat! Ileana and Andrew are sharing rather envy-inducing entries from their Fiji vacation and now, in a new photo, Andrew revealed the story behind one of Ileana's perfect shots, which we have been witnessed previosuly. Andrew, who is a photographer himself with Ileana as his favourite subject, wrote about the behind-the-scenes story of one particular shot featuring Ileana. He credited fellow photographer Bhushan Bagadia for getting the lighting right and also made a confession about Ileana "looking amazing in every photo."

Posting a thank you note to Bhushan Bagadia and admiring his favourite model, Andrew shared how Ileana prepped for a fun photoshoot. "Anyway more serious photos to come but I thought you guys would enjoy this :) also let's just take a moment to see that Ileana always looks amazing in every photo! Not going to lie, hon I'm kind of jealous," read a part of Andrew's caption.

When shooting always take time out to be silly! The awesome @bhushanbagadiapositives (seriously have you checked out his photos!?) helped me with getting the light just right.. anyway he walked past and I thought boom! That's a silly stupid shot! Oh Interesting note.. that was the only time ever he ever walked into my shot ever!!! Anyway more serious photos to come but I thought you guys would enjoy this :) also let's just take a moment to see that @ileana_official always looks amazing in every photo!! Not going to lie, hon I'm kind of jealous :) Now go and see @bhushanbagadiapositives underwater photos!! Give him cake

A post shared by Andrew Kneebone Photography (@andrewkneebonephotography) on Jun 13, 2018 at 8:11pm PDT

Here's the final shot, which was Instagrammed by the actress earlier. Well done, Ileana and Andrew!

Promoted
Listen to the latest songs, only on JioSaavn.com
Here are some more from the duo's Fiji diaries.

World Class Surfing with some epic swells where else but in Fiji! If you love Surfing you will love Fiji ! Come experience some awesome waves in the magnificent waters of Fiji! #fijinow #fijihappy #ileanainfiji #bulahappiness @bhushanbagadiapositives

The Fijian kava ceremony is a beautiful blend of tradition, culture, and happiness. It's definitely something you don't want to miss! #fijinow #fijihappy #bulahappiness #ileanainfiji @andrewkneebonephotography

Ileana D'Cruz and Australian photographer Andrew Kneebone are reported to be married, something which the actress has smartly managed to have dealt with cold diplomacy so far but she's never shied away from posting pictures of herself with Andrew or the ones of her from Andrew's lenses. Last seen in Ajay Devgn's Raid, Ileana's next project is Telugu film Amar Akbar Anthony.