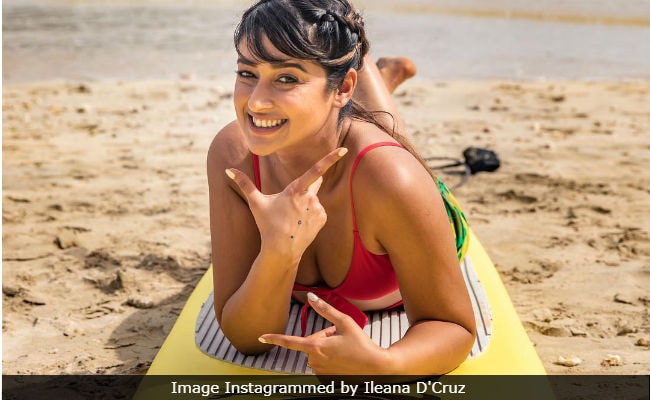 Ileana D'Cruz posing on a surfing board in Fiji. (Image courtesy:

New Delhi: Actress Ileana D'Cruz and her boyfriend Andrew Kneebone are giving us major vacation goals. Ileana's pictures from her Fiji retreat have sent the Internet into a meltdown and we are not surprised. On Sunday morning, Ileana posted a photo, where she can be Kayaking. She wrote: "What better way to discover some of Fiji's 333 islands than with a Fijian guide, a kayak and a paddle." The Barfi actress can be seen wearing a hot pink swimsuit and flip-flops in the picture. She also posted another picture, lying on a surfing boat and wrote: "World class surfing with some epic swells where else but in Fiji. If you love surfing you will love Fiji. Come experience some awesome waves in the magnificent waters of Fiji." The 30-year old actress was named the Indian brand ambassador for Fiji tourism in 2017.

World Class Surfing with some epic swells where else but in Fiji! If you love Surfing you will love Fiji ! Come experience some awesome waves in the magnificent waters of Fiji! #fijinow #fijihappy #ileanainfiji #bulahappiness @bhushanbagadiapositives

Promoted
Listen to the latest songs, only on JioSaavn.com
Ileana, who is living her Eat, Pray, Love moments in Fiji, has been keeping her fans engrossed by posting surreal photos from her vacation. From snorkeling, to practicing Zen, to interacting with the locals, Ileana has been sharing it all. Only yesterday, she shared a photograph of herself standing with Fijian schoolkids and wrote: "Fiji truly is a place where happiness finds you! And these gorgeous Fijian kids were just pure sunshine." Here are some more photos from Ileana's Fiji diaries.

The Fijian kava ceremony is a beautiful blend of tradition, culture, and happiness. It's definitely something you don't want to miss! #fijinow #fijihappy #bulahappiness #ileanainfiji @andrewkneebonephotography

Ileana was a star in Telugu cinema before she made her Bollywood debut with Anurag Basu's Barfi, co-starring Ranbir Kapoor and Priyanka Chopra. She has featured in films such as Main Tera Hero, Happy Ending,Rustom, Mubarakan, Baadshaho and was last seen in Raid, opposite Ajay Devgn. She will be next seen in Telugu film Amar Akbar Anthony.