Ileana D'Cruz Relaxes In A Bathtub, In Latest Pic By Andrew Kneebone 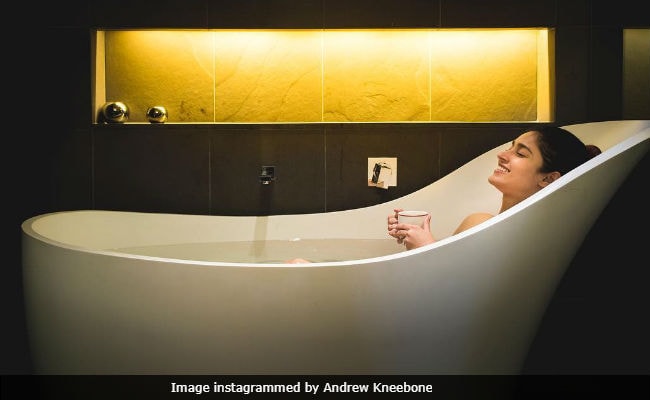 New Delhi: Ileana D'Cruz's photo taken by photographer boyfriend Andrew Kneebone is taking over the Internet. In the picture instagrammed by Andrew, Ileana can be seen relaxing in a bathtub with a cuppa in her hand. "Ileana D'Cruz having time some sweet time alone, kind of," he captioned the photo, which has over 8,000 likes. Instagram users love Ileana's photo and compliments such as "pretty," "beautiful" and "gorgeous" have flooded the comments section. Andrew Kneebone's Instagram page is filled with gorgeous photos of Ileana, who in turn shares several pictures on her page with photo credits to Andrew Kneebone.

@ileana_official having time some sweet time alone, kind of. :)

A post shared by Andrew Kneebone Photography (@andrewkneebonephotography) on Apr 16, 2018 at 6:16am PDT

In one of her posts, Ileana called Andrew Kneebone her "hubby," after which her fans believed that she married the Australian photographer in secret. Even during media interactions (for film promotions) Ileana declined to elucidate. "I don't know what comment to make. Professionally, I am doing well. Personally also, I am doing well. Thank you. I don't think there's any comment to be made. I have kept my personal life fairly private. I don't like to talk about it too much. But it's pretty much there for the world to see," she told news agency PTI.

Here's the post, which started the rumour about Ileana's secret wedding:

Promoted
Listen to the latest songs, only on JioSaavn.com
Ileana D'Cruz featured in several Telugu films before she made her Bollywood debut in 2012's Barfi!, co-starring Ranbir Kapoor and Priyanka Chopra. Last year, she was seen in Mubarakan opposite Arjun Kapoor and in Baadshaho with Ajay Devgn.

She was last seen in Raid, also with Ajay Devgn.