Ileana D'Cruz Is Busy Soaking Up The Sun Before Her Birthday

"Also celebrating that I fit into this gorgeous swimsuit after a while," wrote Ileana D'Cruz 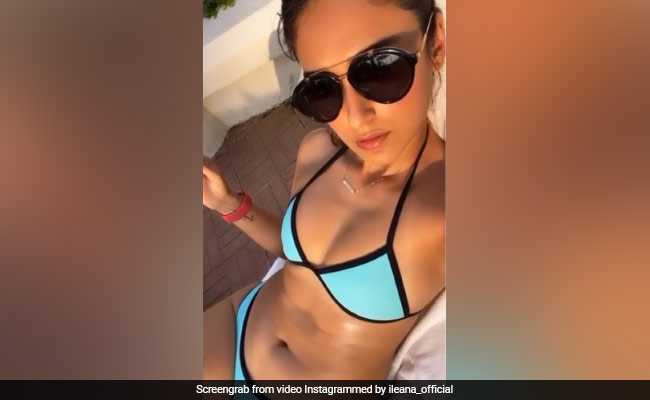 Ileana D'Cruz, who will celebrate her 33rd birthday on Friday, gave her Instafam a glimpse of what her birthday celebrations are going to be like. On Thursday, Ileana posted a video, in which she could be seen soaking up the sun. She did not reveal the location on her Instagram post. In the video, Ileana can be seen wearing a mint-colored bikini by Triangl and she could be seen wearing a pair of black sunglasses and she looks stunning as always. Ileana's post received over 5 lakh likes on Instagram within an hour. She captioned the post: "Last smidge of sun and alone time before the birthday. Also celebrating that I fit into this gorgeous Triangl swimsuit after a while."

Anyone following the Raid actress on Instagram would agree that her profile is a sheer delight. The actress never fails to amaze us with her interesting posts. Remember her belly-dance videos? ICYMI, this is what we are talking about:

CAN. NOT. KEEP. CALM. #Pagalpanti trailer out sooooooon!! Also how lovely is my Sushma teacher in this boomie with me

Mood when I'm told I can have carbs today @chandiniw @stacey.cardoz

How can we forget her bikini appreciation post? Ileana frequently posts pictures of herself dressed in swimwear. Ileana's collection has bikinis and monokinis. Check out the pictures here:

Mama: don't stay out too long in the sun you'll get a tan! Me:

Waiting for the sun to come out @colstonjulian

On the professional front, Ileana D' Cruz was last seen in Amar Akbar Anthony. She is best-known for her performances in Bollywood films such as Barfi!, Phata Poster Nikla Hero, Rustom and Happy Ending to name a few.

Ileana D'Cruz will next be seen in the comedy film Pagalpanti, which stars Anil Kapoor, John Abraham, Urvashi Rautela, Arshad Warsi, Pulkit Samrat and Kriti Kharbanda among others.