"Birthday during a pandemic and while away from family on set was made super special by my lovely team," wrote Ileana D'Cruz 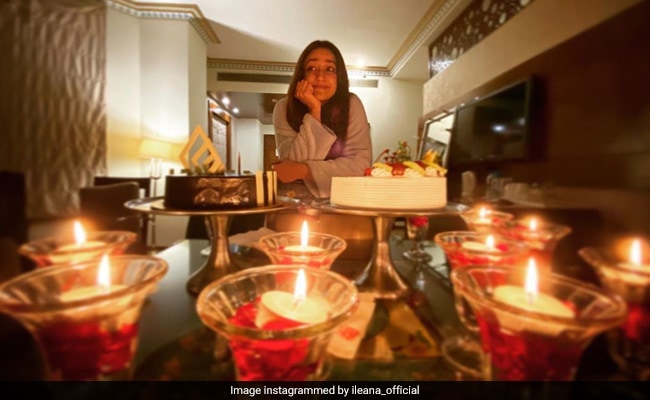 Ileana D'Cruz managed to scoop out some time out of her busy schedule and shared pictures from her 34th birthday (which was on November 1). The actress shared a stunning picture, in which she can be seen surrounded by candles and cakes and her smile says it all. Ileana revealed in her post that she was swamped with work, which is why she couldn't post pictures from her birthday festivities earlier. She wrote in her caption: "Birthday during a pandemic and while away from family on set was made super special by my lovely team. Also don't worry we had all tested negative for COVID-19 before this was taken."

Ileana added in her post, "Also was woken up at midnight for this hence the attire was a fluffy bathrobe. Haha! Also birthday was on the 1st but I've been so busy with work only got around to posting now but I'm so, so thankful to everyone for all the love."

The actress will next be seen in The Big Bull, co-starring Abhishek Bachchan. The film has been directed by filmmaker Kookie Gulati and it has been produced by Ajay Devgn. The Big Bull was announced as one of the seven big Bollywood films to release on OTT platform Disney+Hotstar. However, the film's release date hasn't been announced yet. The actress has also signed Unfair And Lovely with Randeep Hooda.

Ileana D'Cruz was last seen in the 2019 comedy film Pagalpanti, which starred Anil Kapoor, John Abraham, Urvashi Rautela, Arshad Warsi, Pulkit Samrat and Kriti Kharbanda in pivotal roles. She is best-known for her performances in Bollywood films such as Barfi!, Phata Poster Nikla Hero, Rustom and Happy Ending, to name a few.