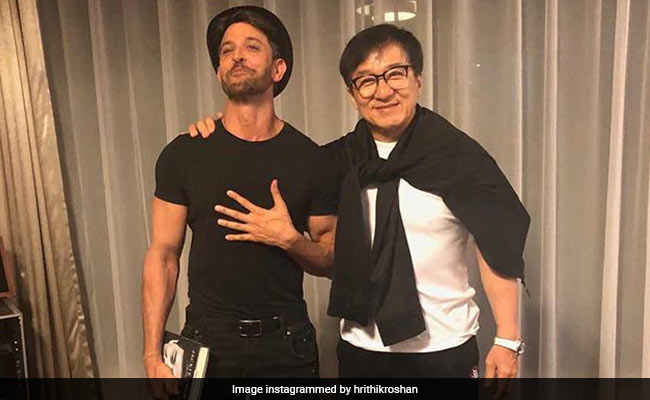 Hrithik Roshan met superstar Jackie Chan on his recent trip to China, where his film Kaabil will premiere soon. HrithiK Roshan shared pictures of himself with Jackie Chan from their rendezvous and said: "Meeting Jackie Chan was a revelation at so many levels. Incredible experience. Inspired." In two pictures, Hrithik, sporting a casual look, posed with Jackie with a big smile on his face while in another picture, both actors posed with panda soft toys. Hrithik Roshan is documenting snippets from his trip to China for Kaabil on social media with diligence. Hrithik's Kaabil co-actor Yami Gautam is expected to join the actor in China before the release of the film on June 5.

Kaabil was directed by Sanjay Gupta and it was produced by Hrithik's father Rakesh Roshan. The film opened in India in 2017 along with Raees, starring Shah Rukh Khan. At that time, Raees dominated the box office leaving very little scope for Kaabil. Raees was the sixth highest earning film of the year while Kaabil collected a little over Rs 100 crore in India.

Kaabil is the story of visually-impaired couple Rohan (Hrithik) and Supriya (Yami), whose lives take a nasty turn after a terrible event.

Meanwhile, Hrithik Roshan is currently awaiting the release of Super 30, which is scheduled to open in cinemas in July. Super 30 is based on the life and trials of mathematician Anand Kumar, who coaches 30 students from economically weaker background for the entrance exam of Indian Institutes of Technology.