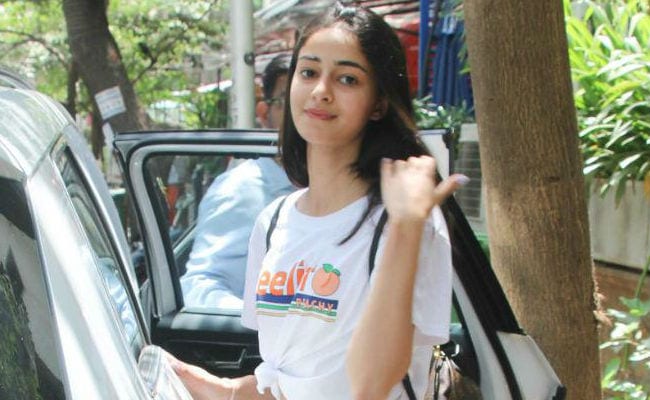 Ananya Panday outside a restaurant in Mumbai.

New Delhi: Chunky Panday's daughter Ananya trended all of Monday, first for her Sunday brunch pictures with her family and also for reports of an accident on the sets of her debut film Student Of The Year, from which she escaped unhurt. Ananya, 19, was involved in an accident while driving a car for a scene in the film, which went out of control. A source told DNA: "She's a good driver, but something went wrong and she lost control of the vehicle and crashed into a tree." However, there were injuries as the precautionary measures were in place. "The team had taken proper precautions before the scene. All the safety gears were in place and nothing happened to Ananya. She didn't even get a scratch," the source added.

Ananya Panday was filming in Dehradun and Mussoorie with her co-stars Tiger Shroff and Tara Sutaria, also debuting in films. Tara Sutaria is a former Disney India VJ and has featured in shows like The Suite Life of Karan & Kabir and Oye Jassie (both Indian remakes of Disney shows).

Team Student Of The Year 2 returned to Mumbai earlier this month and have been spotted chilling with family and friends on several occasions after their arrival. On Sunday, Chunky Panday and his wife Bhavana along their daughters Ananya and Rysa went on a brunch date with the Aankhen actor's brother Chikki and his wife Deanne (a celebrity fitness instructor), their children Ahaan and Alanna and Chunky and Chikki's mother Snehlata Panday.

Promoted
Listen to the latest songs, only on JioSaavn.com
Here are photos from the family outing:

Student Of The Year 2 is produced by Karan Johar and directed by Punit Malhotra. The film is expected to release in November.
Comments
ananya pandaystudent of the years 2ananya panday accident