How Much 'Crazy Fun' Are Varun Dhawan And Anushka Sharma Having Promoting Sui Dhaaga? This Much 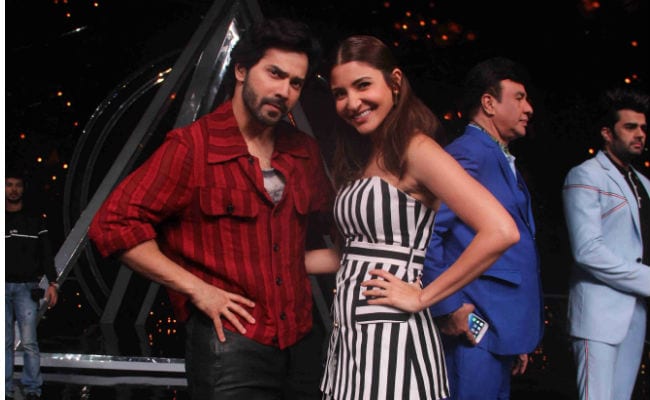 Varun Dhawan and Anushka Sharma at a promotional event

Looks like Varun Dhawan and Anushka Sharma are having "crazy fun" during the promotions of their upcoming film Sui Dhaaga. Varun shared a candid photo featuring Anushka and himself and captioned it: "BTS, Some crazy fun with this girl Anushka Sharma. She's obviously telling me not to do anything embarrassing." The duo are going places to promote their film Sui Dhaaga and the latest photo shared by the actor appears to be a BTS photo from a promotional event. Within few hours, the photo has garnered close to two lakh likes. Actress Dia Mirza dropped a comment on the photo, which read: "But nothing will stop Mauji (the name of Varun's character in the film)".

#BTS Some crazy fun with this girl @anushkasharma. She's obviously telling me not to do anything embarrassing

The trailer of Sui Dhaaga received immense appreciation on release. Set in a small town of Madhya Pradesh, Sui Dhaaga depicts the inspiring journey of Mauji and his wife Mamta. Explaining why the film is "special" to both Varun and Anushka, the actor in an earlier interview to IANS said: "This film is very special for me and Anushka. I don't think I can describe the feeling in words. It's a sense of pride and a sense of what you feel to be an Indian. What it feels to be an Indian, we are never able to tell that to people. Patriotism doesn't always need to be said, it needs to be felt."

Varun Dhawan has been continually sharing updates about his upcoming film on social media. The 31-year-old actor, who plays a tailor in film, shared a promotional video, where he takes us through the workshop sessions he attended to perfect his sewing skills. Varun shared the video on Instagram and wrote: "Three months of training, learning and becoming Mauji! Thanks to Darshan (the costume designer) and Noor bhai(the tailor on the sets), I can finally say I now know how to stitch."

3 months of training, learning and becoming Mauji! Thanks to darshan and Noor bhai, I can finally say I now know how to stitch :D #SuiDhaagaMadeInIndia