How Kriti Sanon Lost The 15 Kilos She Gained For Mimi

"While putting on 15kgs for Mimi was a challenge, losing those kilos wasn't easy for Chubby Sanon either," wrote Kriti Sanon 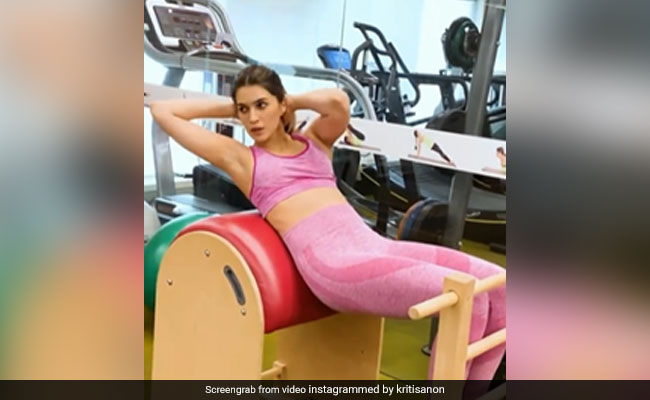 Kriti Sanon, who played the role of a surrogate mother in Mimi, was required to gain over 15 kgs in order to look like a pregnant woman and so she did. In one of her previous posts titled "Gaining those kilos," Kriti talked about her body transformation. Her latest Instagram video, however, documents how she shed the weight for the track Param Sundari in the film. Sharing the video of her exhausting workout routine, she wrote: "While putting on 15kgs for Mimi was a challenge, losing those kilos wasn't easy for Chubby Sanon either! And.. I had kept Param Sundari for later so I have the motivation to get back in shape."

The actress added in her video, "Having put on so much weight for the first time ever and not working out for 3months(not even yoga!), my stamina, strength and flexibility had gone down to zero! In fact, I had to slowly get back to mobility with my joints clicking constantly."

Thanking her fitness instructors Yasmin Karachiwalla and Robin Bhel, Kriti Sanon wrote in her post: "Sharing some snippets of before and after lockdown videos where Yasmin Karachiwala helped me out get back my strength! Don't have enough home workout recorded but thanks Robin Behl for being there through those tough days."

This is the video Kriti Sanon shared:

Earlier, sharing the video about her weight gain, Kriti Sanon captioned the post:"Being blessed with a good metabolism and normally eating burgers and pizzas in life, gaining 15kgs was a challenge... I never thought I could do it, and there was a point when I didn't wanna see food but when I saw how it translated on screen, it was all worth it."

Kriti Sanon's impressive line-up of films includes Adipurush, co-starring Saif Ali Khan and Prabhas. She will also be seen in Bhedia, alongside Varun Dhawan. She will also star in Ganapath with Tiger Shroff. Her next release is Bachchan Pandey, opposite Akshay Kumar.