"Gaining Those Kilos": How Kriti Sanon Prepped For Her Role In Mimi

"There was a point when I didn't wanna see food but when I saw how it translated on screen, it was all worth it," wrote Kriti Sanon 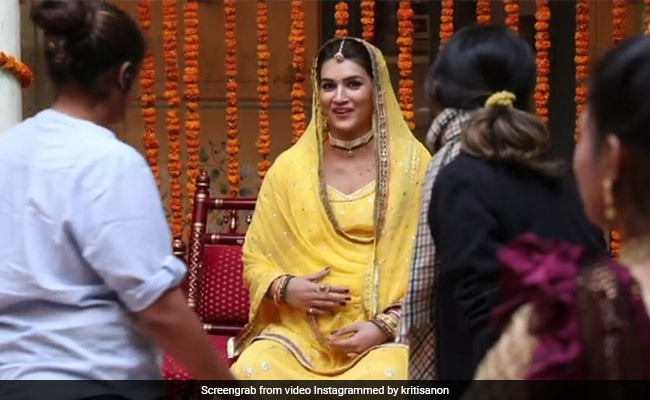 Kriti Sanon in a still from Mimi. (courtesy kritisanon )

Kriti Sanon, who plays the role of a surrogate mother in her forthcoming project Mimi, shared a video on her Instagram profile, in which she shared her journey of becoming Mimi. "Gaining those kilosss," she captioned the video. In the video, Kriti talks about her body transformation. A segment of the film required her to gain over 15 kgs in order to look like a pregnant woman. "Laxman sir (the director Laxman Utekar) told me... "Mimi, I wanna see your face and believe that you are pregnant." Two months later when a new Kriti returned to the sets, she "didn't want to see food."

Sharing the video, Kriti Sanon captioned the post: "Being blessed with a good metabolism and normally eating burgers and pizzas in life, gaining 15kgs was a challenge... I never thought I could do it, and there was a point when I didn't wanna see food but when I saw how it translated on screen, it was all worth it."

The film, also starring Pankaj Tripathi, Supriya Pathak, Sai Tamhankar and Manoj Pahwa, has been directed by Laxman Utekar and it has been produced by Dinesh Vijan. AR Rahman has composed the music for the film. Mimi's world premiere is on July 30 on Jio Cinema and Netflix.