Kriti Sanon On Mimi: "This Is One Of The Most Beautiful Scripts I Have Read"

"I had a really nice experience shooting for the film," said Kriti Sanon 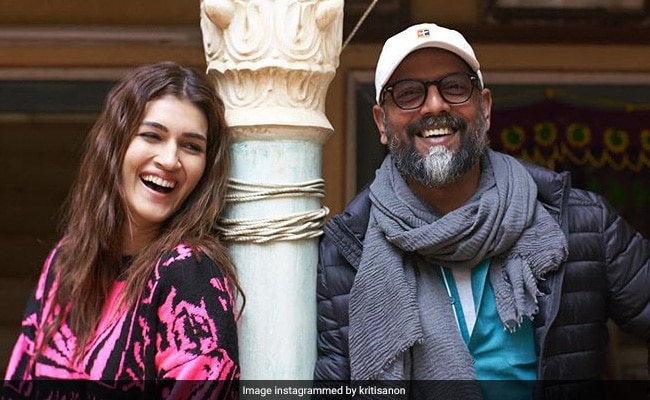 Kriti Sanon with Laxman Utekar on the sets of Mimi. (Image courtesy: kritisanon)

Kriti Sanon revealed that playing the role of a surrogate mother in her upcoming film Mimi was a journey altogether for her, as an actor. Speaking on the sidelines of a promotional event in Mumbai, Kriti Sanon in an interview to news agency IANS, said, "I had a really nice experience shooting for the film. In fact, I feel this is one of the most beautiful scripts I have read. Sometimes, it happens that certain scenes of a film look really good on paper but you are not able to execute them when you are shooting and vice versa. But in this film that wasn't the case."

Last year, Kriti revealed the first look of the film on her Instagram profile. The poster of the film, which is based on surrogacy, shows two hands, one holding a newborn baby and the other extended forward to hold the child. Sharing the first look of Mimi, Kriti Sanon captioned it: "Life is a journey filled with unexpected miracles. Get ready for a journey like never before, #Mimi! This one's gonna be so special."

Have a look at the poster here :

Life is a journey filled with unexpected miracles. Get ready for a journey like never before, #Mimi !! This one's gonna be so special.. #DineshVijan @laxman.utekar #PankajTripathi @MaddockFilms @officialjiocinema

The 29-year-old actress recently wrapped up the shooting of her upcoming film. Speaking of her equation with the film's director Laxman Utekar, she told IANS, "If we shot this film as effectively as it looked on paper, credit goes to the whole team and especially Laxman Utekar. This is my second film with him. We haven't explored the topic of surrogacy in our films. I like the fact that Laxman Utekar has the ability to make an entertaining and humorous film out of a serious topic. I feel it is really important to do that because you are not making a documentary."

A few days ago, Kriti shared a group picture on her Instagram profile, featuring the cast and crew of Mimi. She captioned it, "And it's a wrap. Mimi has been such an experience. The most satisfying schedule ever with a super passionate and hardworking cast and crew." Take a look:

And its a WRAP!! #Mimi has been such an experience!! The most satisfying schedule ever with a super passionate and hardworking cast & crew!! Its such a lovely feeling when everyone just wants to put in their best effort to make a beautiful film! #Mimi this one's too close to my heart! @laxman.utekar @maddockfilms #Dinoo #PankajSir #ManojSir #SupriyaMam #RohanShankar #SamruddhiPorey Missed u yesterday @saietamhankar @harjeetsphotography

Mimi is inspired by the 2010 Marathi movie Mala Aai Vhhaychy, which featured Samruddhi Porey, Urmila Kanitkar, Sulabha Deshpande and Stacy Bee in pivotal roles. The original film also won a National Award for Best Feature Film in Marathi in the year 2011. The story of Mimi revolves around the acceptance of the concept of surrogacy in India.