Kriti Sanon Gets A Tattoo. Can You Guess What It Is? 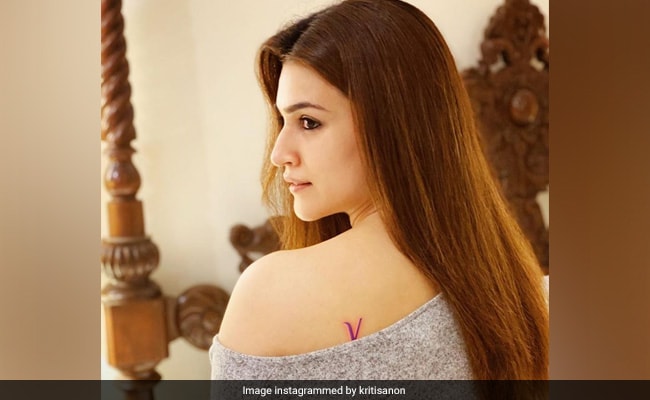 There's "something new" in Kriti Sanon's life! The 29-year-old actress shared just got inked and shared a glimpse of her new tattoo on Instagram. "The start of something new," she captioned her photo, in which she sports an off-shoulder top that partially shows her tattoo. It appears that Kriti Sanon's tattoo is a "K" - the first letter of her name - and that she wants to keep the mystery alive as she's strategically placed her top to make it look like just a "V" in the photo. The Panipat actress added the hashtag "inked" to her tattoo announcement post. Take a look at it here:

The start of something new.. #Inked

Kriti Sanon loves to update her Instafam with anything and everything "new" that's happening in the personal and professional spheres of her life, had introduced her new pet on Instagram earlier this year: "Phoebe! Meet the new member of our family! She is adooorraabbbllee! Disco has a new friend at home.. Girlfriend or Sister- yet to be decided!"

PHOEBE !! Meet the new member of our family!! She is adooorraabbbllee!! Disco has a new friend at home.. Girlfriend or Sister- yet to be decided! @nupursanon

On the work front, Kriti Sanon will next be seen in a yet untitled comedy, co-starring Rajkummar Rao, Paresh Rawal and Dimple Kapadia. Produced by Dinesh Vijan's Maddock Films, "This one's gonna be a fun crazy ride," wrote Kriti. Can't wait Kriti Sanon was last seen in Ashutosh Gowariker's period piece Panipat, after which she made a special appearance in Pati Patni Aur Woh.