Rajkummar Rao, Kriti Sanon And Dimple Kapadia To Feature Together In A Comedy 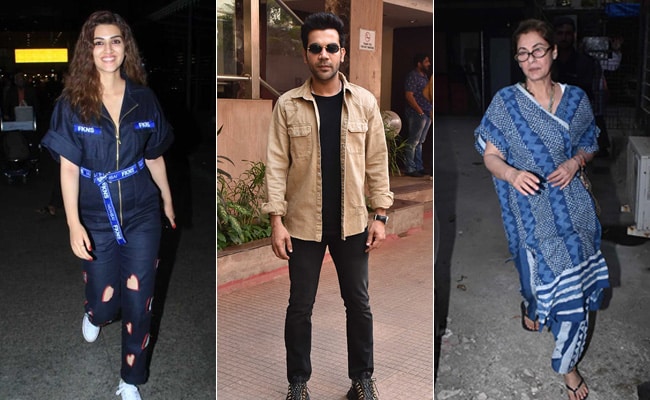 It's official! Producer Dinesh Vijan made an official announcement on Twitter about his new project. Stars Rajkummar Rao, Kriti Sanon, Dimple Kapadia and Paresh Rawal will be sharing screen space in a comedy film. It will be directed by Abhishek Jain, who has previously directed Gujarati films like Kevi Rite Jaish and Bey Yaar. He has worked in Bollywood industry as an assistant director in the films Saawariya, Yuvvraj and Guzaarish. Earlier, Rajkummar Rao and Kriti Sanon had starred in 2017 film Bareilly Ki Barfi. Dinesh Vijan heads production company Maddock Films . On Twitter, their handle made this announcement with a poster. Revealing that the shoot will be in Delhi, the tweet read: "Dinesh Vijan is ready to tickle your funny bones in our next! The shoot for this laughter riot begins next month, in Delhi."

#DineshVijan is ready to tickle your funny bones in our next! The shoot for this laughter riot begins next month, in Delhi.@RajkummarRao@kritisanon#DimpleKapadia@SirPareshRawal@cinemanabhishekpic.twitter.com/6FTmjQey0A

The film would be a comedy based on an orphan, who decides to adopt parents. Talking about the film Dinesh Vijan said, "This innovative idea also came from real life though it is not inspired by any incident in particular. We have spun it into a crazy comedy with our unique tadka," in an interview with Mumbai Mirror. Referring to another project that he wanted to work on with Kriti and Rajkummar, he said, "That project wasn't working out, so, one day, over a cup of coffee, I sketched out this idea to them and they jumped at it. Raj and Kriti came on board even before the script was written."

Director Abhishek Jain will make his debut as a director in Bollywood with this film, which is yet to be titled. Talking about him in the same interview, Dinesh Vijan said, "It's always been our policy to back new directors, be it Amar Kaushik who gave us Stree and Bala, Laxman Utekar who came good with Luka Chuppi and is currently directing Mimi, and Hardik Mehta who will keep you engaged in Roohi Afza. With Abhishek at the helm, we are looking forward to a roller-coaster ride that children and parents can watch together."

On the work front, Rajkummar Rao will feature inupcoming filmsRoohi Afza and Netflix's The White Tiger. Meanwhile, Kriti Sanon is working on her next film Mimi.