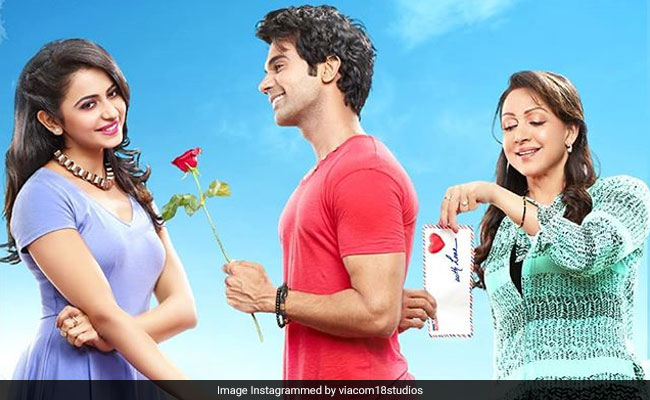 The trailer of Hema Malini, Rajkummar Rao and Rakul Preet Singh's Shimla Mirchi dropped on the Internet on Thursday and it promises an unusual love story. In case you are wondering how, the film will showcase how a single mother (Hema Malini) and her daughter (Rakul Preet Singh) fall in love with the same man (Rajkummar Rao). The trailer starts with Rajkummar Rao's character trying to say 'I love you' to a girl. But he starts stammering as he is too scared to do that. He tries to confess his love for Rakul Preet but fails and decides to write a letter to her. This is where the story takes a twist. Rakul's single mother Hema Malini receives the letter and falls in love with Rajkummar, thinking that he loves her back. What follows next are hilarious scenes showing how the misunderstanding affects the lives of Rajkummar Rao, Hema Malini and Rakul Preet Singh.

Just like us, Hema Malini's fans are also excited to see her on big screen again after such a long time. Take a look at Shimla Mirchi's trailer:

Directed by Ramesh Sippy, the film marks Hema Malini and the filmmaker's fourth project together. The shooting of the film was completed a couple of years ago as it went on floors in 2014. Not to miss that Shimla Mirchi will also mark Ramesh Sippy's first film after over two decades as his last release as a director was Zamaana Deewana in 1995.

Other than Hema Malini, Rajkummar Rao and Rakul Preet Singh, Shimla Mirchi will also feature Shakti Kapoor and Kanwaljit Singh. The film is scheduled to release on January 3, 2020.