"Dear Ranveer Singh, you are Mimi's favourite! And mine too," wrote Kriti Sanon 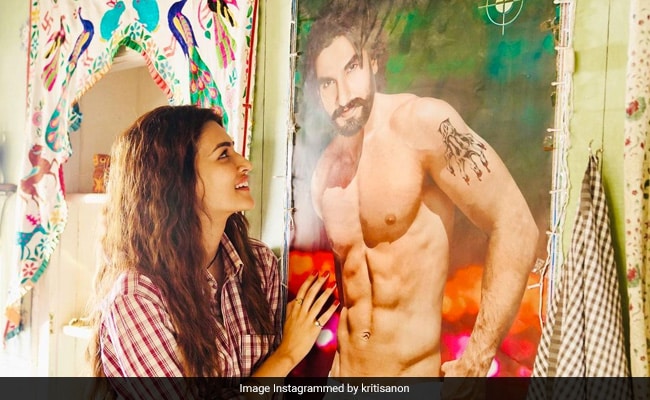 Ranveer Singh celebrates his 36th birthday today and he received some super cool greetings from fans, friends and colleagues. This one is from his fan girl Mimi aka Kriti Sanon. The actress shared a picture of herself admiring a poster of Ranveer Singh. In her caption, the actress wrote that Ranveer is Mimi's "favourite." For the uninitiated, Mimi is the name of Kriti's next project, in which she plays the titular role. "Dear Ranveer Singh, you are Mimi's favourite! And mine too. Wish you a very happy birthday. From Mimi and me," she wrote. She accompanied the post with the hashtags #HappyBirthdayRanveerSingh and #Mimi.

Kriti Sanon was last seen in the Ashutosh Gowariker-directed 2020 period drama Panipat, in which she played the role of Parvati Bai, the second wife of Sadashiv Rao. Kriti is known for starring in films like Dilwale, Bareilly Ki Barfi, Raabta, Arjun Patiala, Housefull 4 and Luka Chuppi. Her next release is Laxman Utekar's Mimi and Bachchan Pandey, opposite Akshay Kumar.

Kriti Sanon's impressive line-up of films also includes Adipurush, co-starring Saif Ali Khan and Prabhas. She will also be seen in Bhedia, alongside Varun Dhawan. She will also star in Ganapath with Tiger Shroff. The actress made her Bollywood debut with the 2014 film Heropanti.

Ranveer Singh has a super busy schedule ahead. He will next be seen in Jayeshbhai Jordaar and Rohit Shetty's Cirkus. He also awaits the release of '83 and Sooryavanshi. His next project is Karan Johar's Rocky Aur Rani. The actor will soon make his TV debut with The Big Picture.