How Do We Unsee This Doll Inspired By Deepika Padukone In "Padmaavat"?

Yes, the "Padmaavat" doll is a thing and is giving us Chucky vibes 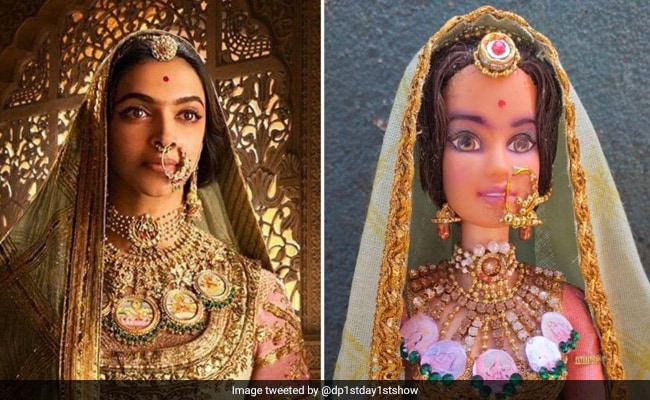 The Internet is an entertaining place, and sometimes a horrifying one. We chanced upon something that looks like the stuff of nightmares and seems to be a doll version of Deepika Padukone's character from the movie "Padmaavat." Yes, it's a thing and it's totally giving us Chucky vibes. We can't unsee it, much as we would like to. Several pages dedicated to the Bollywood actress have been sharing pictures of a doll which is inspired by Deepika. In the now viral picture, the doll can be seen wearing a pistachio-coloured lehenga similar to the one Deepika wears in the film. From the mang tikka to the big nose ring and necklace, and even the placement of the bindi - everything is on point. The only tiny detail that the makers of the doll missed is the unibrow.

Check out the picture of the doll here:

Directed by Sanjay Leela Bhansali, "Padmaavat" was one of the highest grossing movies of 2018. The film is based on Malik Muhammad Jayasi's ballad, which narrates the story of Rani Padmini of Chittor. The film featured Deepika Padukone as Padmavati, who performs jauhar along with hundreds of Rajput women, after Alauddin Khilji (played by Ranveer Singh) breaches the fort of Chittor. Shahid Kapoor starred as Rajput king Ratan Singh. The film also featured Jim Sarbh, Aditi Rao Hydari and Raza Murad in pivotal roles. The film won three National Film Awards in 2019.

On the work front, Deepika Padukone will next be seen in Kabir Khan's sports drama '83, in which her husband Ranveer Singh will play the role of Kapil Dev, while she will star as Kapil Dev's wife Romi Bhatia. The actress will also be seen in the Hindi remake of the 2015 film The Intern, co-starring Rishi Kapoor. The original film featured Robert De Niro and Anne Hathaway in the lead roles.

Meghna Gulzar's Chhapaak, which is based on acid attack survivor Laxmi Agarwal's life, remains Deepika's last release. Another project in Deepika's pipeline is a retelling of Mahabharata from the point of view of Draupadi. She will be producing the film. The actress also has an untitled film with Siddhant Chaturvedi and Ananya Panday in the pipeline.