Hina Khan, Who Moved To Mumbai Without Telling Her Parents, Recalls Her Journey

Hina Khan also recalled the time she would "shoot all night, study in the breaks" 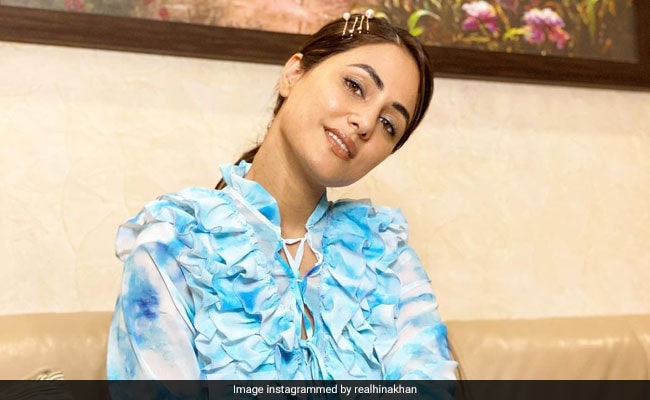 TV star Hina Khan, who became a household name after featuring as Akshara in the popular television show Yeh Rishta Kya Kehlata Hai, in her piece for Humans Of Bombay, recalled her journey in showbiz. The actress revealed that initially her parents were "hesitant" to even send her to Delhi. She wrote: "I come from an orthodox Kashmiri family where becoming an actor was never an option. My parents were even hesitant to send me to Delhi for college but somehow, I convinced Papa. So, when a friend suggested auditioning for a serial, I said no. Upon insistence, I gave it a go and the casting directors loved me! The next day, I was selected for the lead role." Hina moved to Mumbai at the age of 20 to pursue a career in acting without informing her parents. She added, "I moved to Bombay without telling my parents, I was 20. The production people helped me find a place. It took me weeks to tell Papa. He was livid. Mom's friends and relatives cut ties with us."

Hina, who became a star after featuring the daily soap, wrote: "But by then, my serial had gained popularity. After weeks of cajoling, Papa said, 'you can continue only if you complete your studies.' Then, my parents moved to Mumbai." Documenting her exhausting schedule, the actress wrote: "I'd shoot all night, study in the breaks, then fly to Delhi to give my exams. The family stress was constantly looming - I told Mom to not bother, but it wasn't easy. We'd argue a lot. But every year, my serial was the number 1 show. I fell in love with the camera."

Hina Khan added that the TV reality show Bigg Boss was a milestone in her career. She added, "After 8 years, Bigg Boss came my way. Initially, I had a 'no shorts, no steamy scenes' policy but over time, I decided to make my own rules.

In her piece, Hina also opened up about her relationship with boyfriend Rocky Jaiswal and added, "And just when my parents had gotten used to me being an actor, I told them I was seeing Rocky. It came as a shock, everybody in our family has had arranged marriages. But I gave them time and now, they love him more than me." Hina, who made her debut appearance at the Cannes Film Festival in the year 2019, wrote, "After, TV offers poured in, but I took a risk and quit TV to do movies. I was thrilled when I debuted at the Cannes film festival last year, I felt so proud to represent India abroad. The way the entire film and TV industry came to my support, humbled me."

The actress, who stars in the web-series Wishlist (also produced by her), added, "This year, I moved onto OTT platforms-the script demanded a kissing scene, so I spoke to my parents. I said 'yes' only after they understood it was needed for the role, my movie became one of the most watched films on the platform." Hina Khan signed off the note saying, "It's been 11 years since I first faced the camera - the little girl growing up in Srinagar would've never imagined walking Cannes. But a series of difficult choices have gotten me here. From Srinagar to Bombay, from being the first actor in my family to dating someone out of the community to giving up easy money at my peak, I've proudly carved my own way."

Hina Khan was also seen in a brief appearance in the TV show Naagin 5, in which she starred as the titular shape shifting serpent. The actress stepped into films with Lines, the poster of which was unveiled at the 72nd Cannes Film Festival in May, last year. The actress was also a part of Kasautii Zindagii Kay 2, in which she played the antagonist Komolika. However, she quit the show after a few months. She also participated in television reality shows like Khatron Ke Khiladi season 8 and Bigg Boss 11.