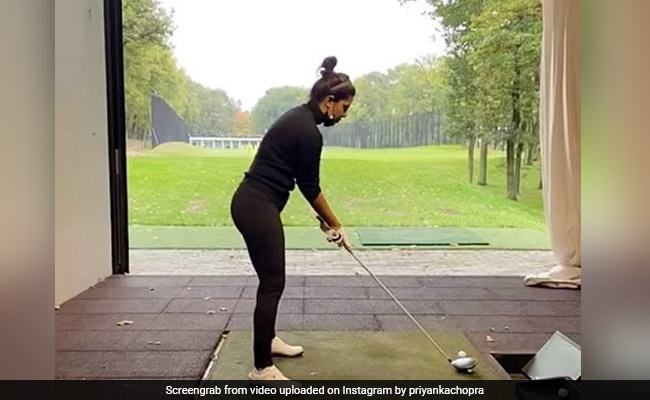 Priyanka Chopra, who is currently in Berlin (Germany) these days (going by her Instagram posts), has actively been sharing posts on her Instagram profile. On Monday, the actress shared a video, in which she can be seen with a golf stick in her hand. In the video, the Quantico actress can be seen dressed in black separates. She can be seen wearing a black mask and a pair of white shoes. The actress captioned the video: "In between 'shots' Thanks for your help." She accompanied the post with the hashtag #PracticeMakesPerfect. Take a look at Priyanka Chopra's post here:

Last week, the actress shared a picture of herself along with her pet Diana from Germany. She could be seen standing next to graffiti, Priyanka captioned the post: "Everything will be ok." She added the hashtag #IssaVibe.

Priyanka Chopra recently unveiled the cover of her memoir titled Unfinished, which will be published by Penguin Random House. In terms of work, Priyanka Chopra was last seen in The Sky Is Pink with Farhan Akhtar and Zaira Wasim. The actress has many projects lined-up, which include Netflix's adaptation of Aravind Adiga's Booker Prize-winning novel The White Tiger, co-starring Rajkummar Rao. She will also be seen in We Can Be Heroes and a film with comedian Mindy Kaling. The actress also signed Amazon's Citadel and Sangeet Project.