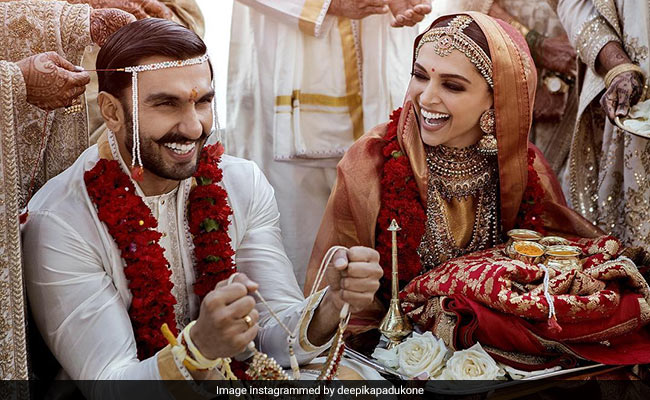 Deepika Padukone and Ranveer Singh's first wedding anniversary is just around the corner (on November 14) and the couple plan to celebrate it in the most beautiful manner. Just like their wedding ceremonies, their anniversary celebrations will also be a private affair. The star couple will fly out of Mumbai on Wednesday. On November 14, they will visit the Tirupati temple and the Padmavathi Temple in Andhra Pradesh. They will continue the final leg of celebrations in Amritsar, where they will visit the Golden Temple along with their families on November 15. The star couple is expected to return to Mumbai on November 15.

Deepika and Ranveer got married in a traditional South Indian ceremony - per Konkani rituals on November 14 last year. They also had a North Indian wedding on November 15. The couple had an intimate destination wedding in Italy's Lake Como with only close friends and family in attendance. The couple shared their wedding pictures together on social media .

Take a look at the pictures from the wedding ceremony here:

Deepika Padukone and Ranveer Singh's first film together was Goliyon Ki Rasleela Ram-Leela (2013), which was directed by Sanjay Leela Bhansali. The couple has also co-starred in Bajirao Mastani and "Padmaavat." The couple will soon be seen sharing screen space in Kabir Khan's sports drama '83, in which Ranveer will play the role of Kapil Dev and Deepika will play Kapil Dev's wife Romi Bhatia.

On the work front, Deepika Padukone will next be seen in Meghna Gulzar's Chhapaak, which is based on acid attack survivor Laxmi Agarwal's life.