"Looking at this trailer, it seems that this film will also be very good," said Deepika Padukone 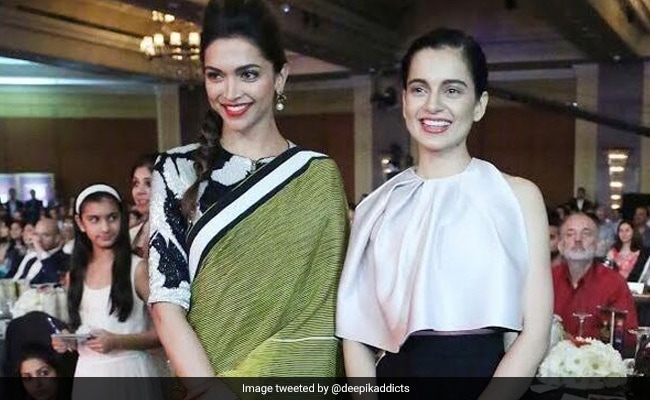 After Abhishek Bachchan, Sonam Kapoor and others tweeted about the trailer of Kangana Ranaut's Panga, Deepika Padukone is also mighty "impressed" with it. SpotBoye reported that speaking at a recent event, the Chhapaak actress said the trailer looks promising: "I watch a lot of trailers for films with my cast and when I get time, I watch these films as an audience. Panga's trailer impressed me a lot. Looking at this trailer, it seems that this film will also be very good." Rangoli Chandel, who is her sister Kangana Ranaut's spokesperson on social media, sent a thank you note to Deepika Padukone on Twitter.

Panga tracks the story of a forgotten Kabaddi champion Jaya, played by Kangana Ranaut, who wants to make a comeback. Not her return to Kabaddi but convincing the world that she can represent team India in her thirties is the biggest challenge she faces. After watching the trailer, Abhishek Bachchan tweeted: "Wonderful! All the best to the team." Meanwhile, Sonam Kapoor wrote: "Fantastic! Looking forward!" Deepika Padukone's Chhapaak co-star had tweeted that the Panga trailer made him quite a bit emotional.

Wonderful!!! All the best to the team. #LePanga#PangaTrailerhttps://t.co/yEnwLUOkVN

Saw #PangaTrailer and I couldn't stop myself from sharing my feelings.

Tugged something so deep inside my heart that I just couldn't stop wiping the tears off my eyes even minutes after watching it.

Earlier this year, Rangoli Chandel had confessed to be Deepika's "biggest cheerleader" when the trailer of Chhapaak released. Rangoli, who is an acid attack survivor, had tweeted: "No matter how unfair and unjust the world is we must not reflect what we hate. This is commendable on Deepika Padukone and Meghna Gulzar's part. Being an acid attack survivor, I pledge to be their biggest cheerleader."

No matter how unfair and unjust the world is we musn't reflect what we hate, this is commendable on @deepikapadukone and @meghnagulzar part, being an acid attack survivor I pledge to be their biggest cheerleader #Chhapaak . https://t.co/TdY5WpZjtE

Panga is all set to hit screens on January 24, ahead of which releases Chhapaak on January 10.

Coronavirus: How Janhvi Kapoor, Malaika Arora, Karisma Kapoor And Others Are Spending Their Quarantine