Ram Charan Birthday: Amitabh Bachchan sent a video message to his RRR co-star on his birthday 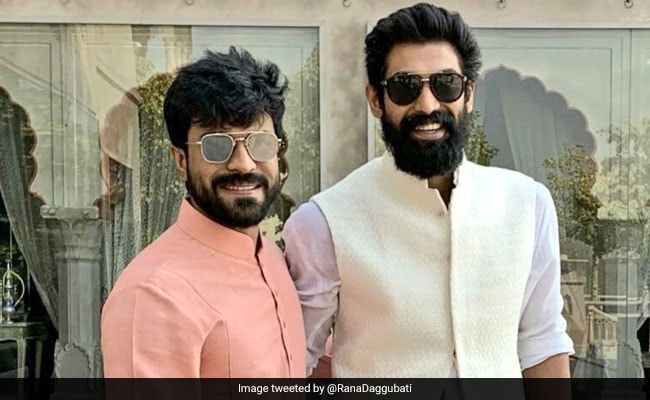 Happy birthday, Ram Charan! Ram Charan's birthday is being celebrated like a festival by fans of the South actor with the hashtag '#HBDRamCharan" trending on Twitter. And not only his fans but also his colleagues and family members have contributed with their own customised birthday wishes and in doing so, Ram Charan's birthday has been made special by the likes of Amitabh Bachchan, who stars in the much talked about Ram Charan-produced Sye Raa Narasimha Reddy and also childhood friend Rana Daggubati. Amitabh Bachchan sent out a video message to Ram Charan, which has been tweeted by the actor's wife Upasana on his birthday.

"Wish you all the success that you deserve in the work that you do - this comes from me and my family here in Mumbai. Have a wonderful day, Charan. You're a wonderful person. I don't how old you're going to be but whenever I see you, I feel like you are about 18-year-old," Big B says in the video. Meanwhile, Upasana had a fan-moment of sorts while sharing the video: "Thanks so much for this really sweet message, Amitabh Bachchan. This is the sweetest gift ever. My hands are still shaking. So excited," she tweeted on Ram Charan's birthday.

Thanks soooo much for this really sweeet message @SrBachchan Garu this is the sweetest gift ever. My hands r still shaking. Soooooo excited. #happybirthday#ramcharan. Love u. pic.twitter.com/u5X0dVJVic

Rana Daggubati kept his birthday greeting for Ram Charan simple and shared a photo from SS Rajamouli's son's Jaipur wedding: "Happy, happy to you my friend. Wish you the best in everything forever!"

Happy happy to you my friend. Wish you the best in everything forever!!! #HBDRamCharanpic.twitter.com/Y67sf6wePR

A hoard of birthday wishes also poured in from Ram Charan's cousins Sai Dharam Tej, Allu Arjun and Varun Tej, who are also well-known actors in the Telugu film industry.

Wish you a very happy birthday charan...May god bless you with loads of success,strength,health and wealth...love you so much #HBDRamCharanpic.twitter.com/ofGr9O9shu

Happy happy birthday to my dearest cousin Ram Charan. I still cherish our commerce tuition days & wanna relive those times once again! Wishing you a great and happy year ahead. #HBDRamCharanpic.twitter.com/7uBttR5oIX

Rakul Preet Singh, who has co-starred with Ram Charan in films such as Bruce Lee - The Fighter and Dhruva, also posted an adorable message. "Happy, happy b'day, Ram Charan! May you have the best year ever... always keep the child in you alive... all the best and keep rocking!"

Happppy happppy bdayyy #RamCharan ! May you have the best year ever.. always keep the child in you alive .. all the best and keep rocking ! #HBDRamCharan

Ram Charan will next be seen in SS Rajamouli's RRR, the ensemble cast of which also includes names such as Alia Bhatt, Jr NTR, Ajay Devgn and others. RRR is reportedly being made on a mega budget of Rs 300 crore and will release in Hindi, Tamil, Telugu and Malayalam.