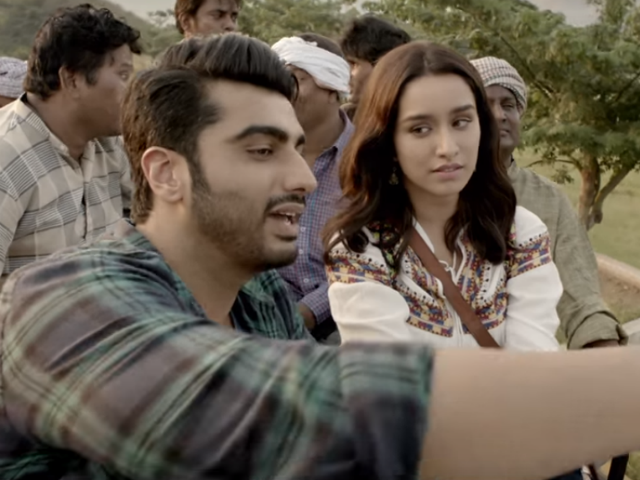 New Delhi: Mohit Suri's Half Girlfriend, starring Arjun Kapoor and Shraddha Kapoor is all set to release on May 19. On Thursday, the makers of the film unveiled Shraddha Kapoor's rendition of Main Phir Bhi Tumko Chahungi. The 30-year-old actress, who is well known for her singing talent, has voiced several songs like Galliyan from her movie Ek Villain and Woh Jahaan from Rock On 2. The beautiful lyrics of Main Phir Bhi Tumko Chahungi have been penned by Manoj Muntashir and the music has been composed by Mithoon. The three-and-a-half minute clip gives us a glimpse of how Shraddha aka Riya Somani falls in love with Arjun aka Riya Somani in the film and their heart wrenching separation. Last month, soulful track Phir Bhi Tumko Chahunga was unveiled which has become quite popular amongst people.


Half Girlfriend is an adaptation of Chetan Bhagat's novel of the same name. The film, which has been shot across Varanasi, Bihar, Delhi, New York City and Cape Town, shows how Madhav Jha and Riya Somani's love for basketball brings them together and how Riya becomes his 'Half Girlfriend.'

Half Girlfriend marks Shraddha Kapoor's third collaboration with Mohit Suri. They have previously worked together in films like Ek Villain and Aashiqui 2.

Promoted
Listen to the latest songs, only on JioSaavn.com
Shraddha Kapoor was last seen in Ok Jaanu, co-starring Adity Roy Kapur. She will next feature in Apoorva Lakhia's Haseena: The Queen Of Mumbai.

Arjun Kapoor, who was last seen in R Balki's Ki and Ka, will next be seen in Anees Bazmee's Mubarakan.

Why Raabta Composer Pritam Has 'Walked Out' Of Homi Adajania's Film