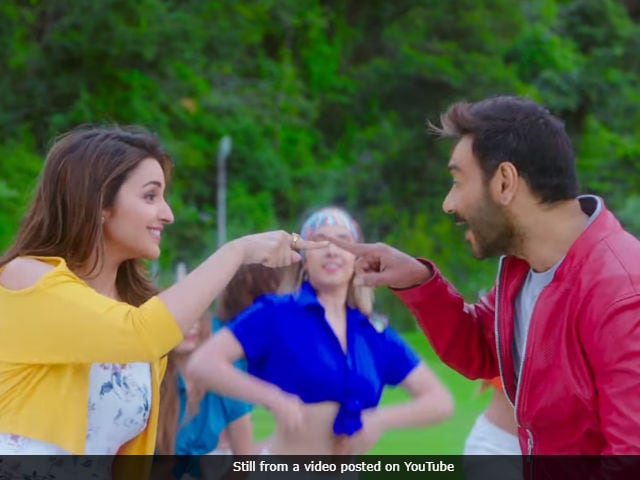 New Delhi: The first song of Golmaal Again is your ticket to time-travel to 1997. Maine Tujhko Dekha, which is picturized on the Golmaal gang and Parineeti Chopra is a revamped version of Ajay Devgn's Ishq song Neend Churayi Meri. It's recreated nicely by Amaal Mallik and Anu Malik (composer of the Ishq song). Amaal and Anu Malik have kept the chorus lyrics and signature music of Neend Churayi Meri and have added additional lyrics, which are written by Kumaar. The song also reiterates the age gap between the characters of Ajay Devgn and Parineeti Chopra, courtesy Arshad Warsi's funny dialogue delivery and also by Parineeti's tweet: "Never thought I'd be dancing with Ajay Devgn on his own hit song. Grew up watching this on TV."


Golmaal Again is the fourth film in the Golmaal franchise. Ajay Devgn, Arashad Warsi, Kunal Khemu, Shreyas Talpade and Tusshar Kapoor will reprise their roles in the Rohit Shetty-directed film while Parineeti Chopra, Tabu and Neil Nitin Mukesh are the new additions to the film's cast.

The trailer of Golmaal Again released on September 22 and it has been viewed more than 35 million times since then on YouTube and Facebook. The trailer hints that this time Golmaal Again will include supernatural elements and Gopu (Gopal, played by Ajay Devgn) is not okay with it. The funniest part of the trailer is when Lucky (Tusshar Kapoor) gets his voice for the second time in the franchise - the first was in Golmaal Returns in a dream sequence. In Golmaal Again, it will be courtesy an evil spirit, who has possessed Lucky.

Watch the trailer of Golmaal Again:

Golmaal Again will release around Diwali.