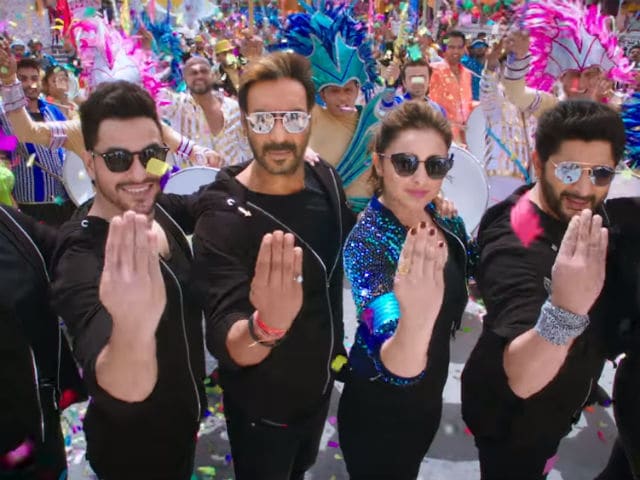 A still from Ajay Devgn and Parineeti's Golmaal Again

New Delhi: The trailer of Golmaal Again, starring Ajay Devgn, Parineeti Chopra, Arshad Warsi, Tusshar Kapoor, Tabu, Prakash Raj, Shreyas Talpade, Kunal Khemu and Neil Nitin Mukesh, has finally been unveiled by the makers of the film. The fourth installment of Rohit Shetty's Golmaal series is back to entertain the audience but this time with a twist. The three-minute trailer shows the movie will not only be a laugh riot but will also scare you in places. The trailer begins with Gopal (Ajay Devgn) waking up startled in the middle of night as he hears strange noises outside his room. However, Laxman (Shreyas Talpade) calms him down by saying, "Gopu, Sundari hai, Sundari. Apni galli ki doggy hai Sundari, Gopu." The gang starts witnessing paranominal activities at home and it is then that Rukmini (Tabu) enters and tells them that their house is haunted. Golmaal Again trailer is definitely quirky and is sure to make you ROFL.

In an earlier interview with news agency PTI, Arshad Warsi promised new jokes in the fourth installment of Golmaal series.

"Had they (their roles) been boring I would have been fed up. Here (Golmaal Again), there's no space to feel like that. This time too we have new jokes and skits," PTI quoted the actor as saying.

Promoted
Listen to the latest songs, only on JioSaavn.com
Golmaal Again is scheduled to release in theatres on Diwali.