Parineeti Chopra, who is a brand ambassador of Australian tourism, is ticking off places from her Australian itinerary 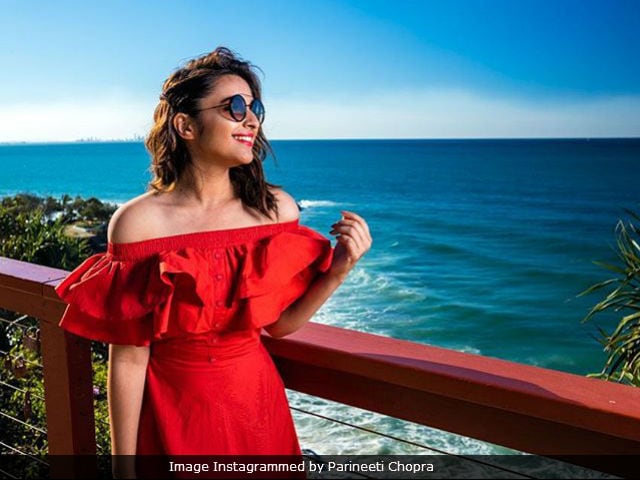 New Delhi: Actress Parineeti Chopra is thoroughly enjoying her trip to Australia and not-to-be missed are the actress' gorgeous pictures from her vacation that are all over the social media. From an adventurous ride on a Harley Davidson in the Australian Alps to exploring the spiritual heart of Australia, Uluru with fairy lights all around, Parineeti is rejoicing each moment from her happening vacation. Injured foot and freezing cold didn't hamper the 28-year-old actress' holiday and she posted a post-card picture on Instagram on Tuesday, in which she's looking gorgeous in a scarlet dress. Parineeti captioned the picture: "Injured foot and freezing cold. But the show must go on?" From Brisbane to Queensland, without much-ado take a look at places ticked off from Parineeti Chopra's itinerary.

Parineeti, who is a brand ambassador of Australian tourism, did not find a better way to explore Uluru than vis-a-vis a Harley Davidson ride. Excited and elated, Parineeti posted this amazing picture on her Instagram handle. Take a look:

What better way to get up, close & personal with #Uluru in @ausoutbacknt, than on the back of a Harley Davidson! @australia @ulurumotorcycletours

This morning I walked through a sky full of stars.. With the sun rising behind me and fairy lights all around, this is what girly dreams are made of The light that you gave me will EVERGLOW @australia @ausoutbacknt @exploreuluru

This picture of Parineeti is just 'WOW', where she is in front of a big rock. Ticking off places from her bucket list, the actress posted these amazing pictures.

"BUCKET LIST tick" kind of day! Look where I am! A rock so big, it's 9 kilometers to go around! So majestic that everything falls silent in front of it. WOW WOW WOW #Uluru @australia @ausoutbacknt

Ok I was sitting in the middle of the desert and painting! Never thought I was going to experience so much culture and history in one afternoon. Still touched #NTaustralia @MarukuArts! @australia @ausoutbacknt

Aren't these pictures lip-smacking and mouth-watering?

Promoted
Listen to the latest songs, only on JioSaavn.com
Take a look at more pictures from Parineeti Chopra's Australia diaries:

Wearing my dive suit to get into the water already! The Commonwealth Games are in Gold Coast next year!! I'm definitely planning to come. And you? @gc2018 #GC2018 @destinationgoldcoast @queensland #thisisqueensland @australia #SeeAustralia

Injured foot but really wanted to try surfing! I need loads of practice though What else to do when you're in Gold Coast?!?! #SurfersParadise @gbrmarinepark @gorideawave @destinationgoldcoast @queensland #thisisqueensland @Australia #SeeAustralia