Before you assume that the Kapoors' customised send-off is a result of the torrential Mumbai rains, let's pay attention to the several hashtags added in the caption 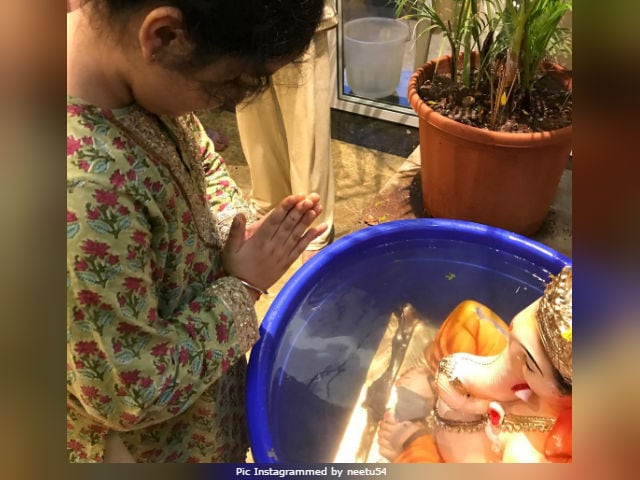 New Delhi: Ganpati Bappa Morya! On Wednesday, Neetu Kapoor and her five-year-old granddaughter Samara bid farewell to Ganpati in the most adorable fashion possible. The veteran actress shared a photograph of Samara, in which she can be seen paying her respects to Bappa with folded hands. Samara was actually bidding adieu to Ganpati at the Kapoor residence and had the idol immersed in a pot of water in what appears to be the garden area of the house. Before you assume that the Kapoors' customised send-off is a result of the torrential Mumbai rains, let's pay attention to the several hashtags added in the caption. "Sam's farewell pranam to Ganesh," wrote Neetu Kapoor, and followed it up with these tags - '#savethesea #savemarinelife #homeimmersion #spreadawareness.'

Neetu Kapoor was also one of those celebrities who posted about the disruptive Mumbai rains on social media yesterday. In her post, she sought blessings from Lord Ganesha - "Ganesha take care of our city."

Ganesha take care of our city

Neetu Kapoor's Ganesh Chaturthi festivities were all about being eco-friendly.

Actor Riteish Deshmukh, who is also a fan of nature friendly Ganeshutsav celebrations, made an eco-friendly Ganpati idol (with an attached planter) from scratch and shared the tutorial on social media.

Celebrating #GaneshChaturthi in America, Made an idol, I humbly dedicate it to our Farmers. #ECO#Planter#Visarjan#SonOfAFarmer#Bappapic.twitter.com/OnuU1S0D6a

Promoted
Listen to the latest songs, only on JioSaavn.com
Samara is the daughter of Neetu and Rishi Kapoor's daughter Ridhima Sahni, who is married to businessman Bharat Sahni. Samara, knowingly or not, occupies a lot of space on Neetu Kapoor's social media. Samara was the star of Neetu Kapoor's recently held 59th birthday party and is her favourite selfie partner - there's proof on Instagram. Samara's also helped uncle Ranbir Kapoor promote his film Jagga Jasoos on Instagram.

Sunshine with my lil sunshine

What do you think of Samara's cuteness overloaded pic? Tell us in the comments below.