From Ramayan To Shaktimaan And Circus: We Are Busy Time Travelling With These Classics

We are starting to believe in time machines. 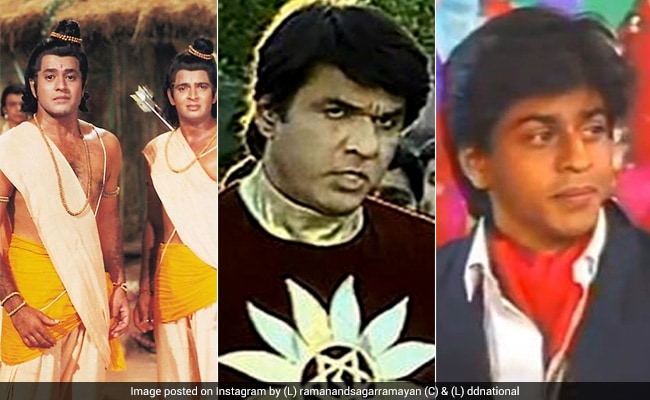 After a 21-day lockdown due to the coronavirus outbreak was imposed by PM Narendra Modi, some of us were thinking of ways to kill time. However, a sense of relief was witnessed when Doordarshan announced the re-telecast of some of the classics. From re-tellings of the epics to watching Shah Rukh Khan before he swayed his arms in the air and stole the dulhaniya from the dilwale - all the shows cater to different sensibilities. For the adventure loving - there's Mowgli. If thrill is what you seek - you've got detective Byomkesh Bakshi. For those haunted by boredom, be right there, Shaktimaan is on his way. BRB, binging on these classics.

The opening credits of the show - Mangal Bhavan Amangal Haari - still give us goosebumps ( in a good way, of course). Ramanand Sagar's Ramayan, which was a Sunday morning staple in the Eighties, hasn't lost its charm one bit. The show which starred Arun Govil, Deepika Chikhalia and Sunil Lahri as Lord Ram, Sita and Lakshman, acquired the status of a classic overtime and is quite intact even today. The soaring ratings of the show are just one example. The show has been ruling social media platforms (almost after 33 years). The show boasted several well-known stars among its cast - Dara Singh played Hanuman, Lalita Pawar was cast as Manthara, and Vijay Arora played Indrajit and Arvind Trivedi as Ravana.

Sherlock Holmes is the epitome of cool and there's no denying that. But our very own desi detective Byomkesh Bakshi is quite something. Sharadindu Bandyopadhyay's creation that starred Rajit Kapur in the titular role, and KK Raina as his sidekick Ajit Kumar Banerji, had us hooked and how. As some might recall, the bespectacled man with a heavy accent was quite a popular choice during fancy dress competitions. Those were the days.

Come on, just own up that you still can't help but sing along when Jungle Jungle Baat Chali Hai plays on TV (or anywhere else for that matter). Rudyard Kipling's classic The Jungle Book got so many versions and spin offs - from film adaptations, to shows, fans theories and what not. But we will always have a soft corner for the animated series. Who would have thought a kid raised in a jungle would turn out to be a favourite of a generation that would later binge on Netflix and Prime? Nineties kids would know what Shere Khan's baritone and Mowgli's adventures meant to us.

The moment someone says the word circus, two visuals are likely to pop out in the head for sure. The first being Raj Kapoor in Mera Naam Joker, and second - Shah Rukh Khan from the Eighties TV show Circus. Directed by Aziz Mirza and Kundan Shah, the show gave us an insight into the lives of circus troupes. The feeling of spotting (now a film director) Ashutosh Gowariker in the scenes - priceless!

You were waiting for this one, no? Well, we were saving the best for the last. How we desperately waited for the weekends, just to catch an episode or two of our favourite superhero that came in a maroon and gold outfit. Mukesh Khanna as Shaktimaan and his alter ego Pandit Gangadhar Vidyadhar Mayadhar Omkarnath Shastri, were equally lovable. Also, how can we forget Shahktimaan's Choti Choti Magar Moti Baatein? A mini-educational series that came with valuable moral science lessons.

Which show is your pick for the day? Tell us using the comments section below.