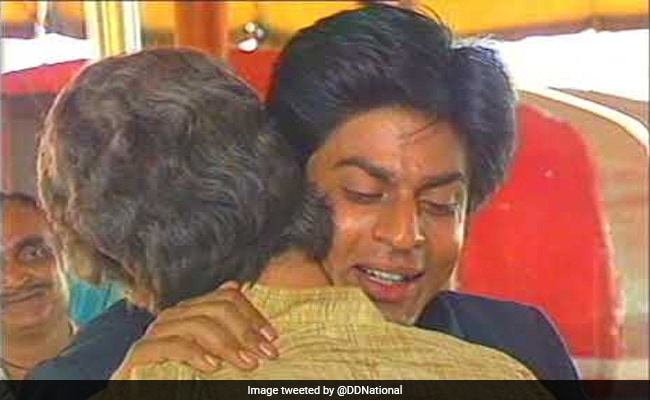 Shah Rukh Khan in a still from Circus (courtesy DDNational)

Doordarshan favourites are back on the telly amid the nationwide lockdown because of the coronavirus outbreak. After Ramayan made a comeback on DD National after 33 years on Sunday morning, the return of two new shows were announced - Shah Rukh Khan's 1989 series Circus and Rajit Kapoor starrer Byomkesh Bakshi, which aired in 1993. "Shekharan is back on DD National! Friends, stay at home and watch your favourite Shah Rukh's Circus - TV Series (1989) - From March 28 at 8 pm," DD National tweeted. The role of circus troupe member Shekharan in Circus was one of SRK's earliest and is still fondly recalled by those who grew up watching Doordarshan in the Nineties. Directed by Vicky Aziz Mirza and Kundan Shah, Circus also starred Renuka Shahane, Pawan Malhotra and Ashutosh Gowariker, now a director, in a significant role. Shah Rukh's TV debut was in 1989's Fauji and 1992's Deewana was his first Bollywood movie.

Shekharan is BACK on @DDNational!
Friends, #StayAtHome and watch your favorite @iamsrk's #Circus - TV Series (1989) - From 28th March at 8 pm on @DDNationalpic.twitter.com/MZ2zWvmyf5

Doordarshan announced Rajit Kapoor's return as Nineties' television's favourite detective Bymkesh Bakshi like this: "MUST WATCH -Rajit Kapur in a role with which he will be associated forever! Detective show Byomkesh Bakshi from March 28 at 11 am only on DD National." The popular show originally ran between 1993 to 1997 and also starred KK Raina as the detective's sidekick Ajit.

MUST WATCH -#RajitKapur in a role with which he will be associated forever!
Detective show #ByomkeshBakshi in few minutes at 11 am only on @DDNationalpic.twitter.com/1wsa1Lj70a

On Friday, Twitter went into a tizzy when Doorshan announced that Ramayan and Mahabharat will be aired on television again, starting Saturday. The cult shows will be aired twice a day.

Happy to announce that on public demand, we are starting retelecast of 'Ramayana' from tomorrow, Saturday March 28 in DD National, One episode in morning 9 am to 10 am, another in the evening 9 pm to 10 pm.@narendramodi
@PIBIndia@DDNational

Prime Minister Narendra Modi imposed a nationwide lockdown for three-weeks as a precautionary measure against the spread of the novel coronavirus. In India, positive cases of Covid-19 have risen to over 900.