From One AK To Another: Anurag Kashyap's Birthday Wish For "Young Man" Anil Kapoor

"It's been quite a journey (wasn't always easy ) but fun none the less," replied Anil Kapoor 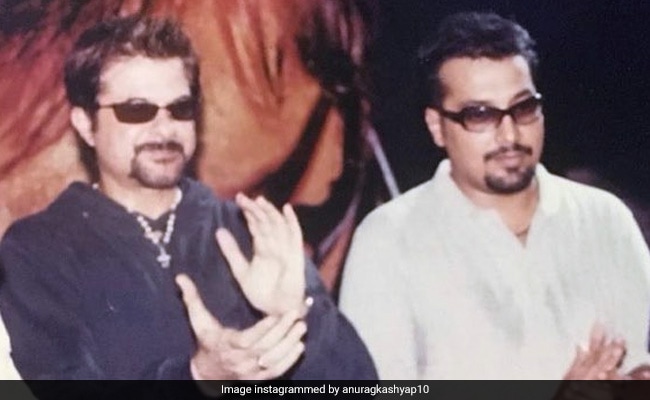 Anil Kapoor and Anurag Kashyap might not like each other in Netflix's AK vs AK but when it comes to real life, the duo share cordial relations. On Anil Kapoor's 64th birthday, filmmaker Anurag Kashyap shared a few throwback pictures along with an adorable note for the veteran actor. Anurag Kashyap began his note by writing: "Today when AK vs AK is releasing ... I want to put out these pictures of our launch of the most prized AK (Allwyn Kalicharan) the film that never got made and Vikramaditya Motwayne and Avinash Sampat made it the basis for the ever experimental, genre defying Motwane's yet again "FIFTH FILM by VM"... All I want to say is Thank you Mr Anil Kapoor ... The most secure (insecure actor) human being , who just does not know how to give up, who always challenges himself and also you(me) to be your best and always wants to come out on top."

Anurag Kashyap added in his greeting for Anil Kapoor, "The man who today at 64 or is it 65, is the most healthy competitor, is as hungry as he was when he started out. The man who can teach you so much about how to make the best out of what you have. He, who is not afraid to be vulnerable, to laugh at himself and to put himself out there in ways no one else does. A true Janbaaz like Vasan Bala says . Thank you AK sir for inspiring me and pulling me out of my lethargy and reluctance and pushing me to do my best . A very, very happy birthday to you young man and endless love. Circa 2003."

Anil Kapoor, reacting to Anurag Kashyap's extensive post, wrote: "Thank you so much AK. It's been quite a journey (wasn't always easy ) but fun none the less! Lots of love from AK to AK!" Check out the post here:

AK vs AK opened to largely positive reviews from film critics. In his review for NDTV, Saibal Chatterjee gave the film 3.5 stars and he wrote: "The Netflix original film, directed by Vikramaditya Motwane, blurs the line between reality and fiction."