AK Vs AK Review: The Netflix original, directed by Vikramaditya Motwane, blurs the line between reality and fiction. Anil Kapoor (AK) and Anurag Kashyap (AK) play themselves and take swipes at each other in a trippy actor-director tussle. 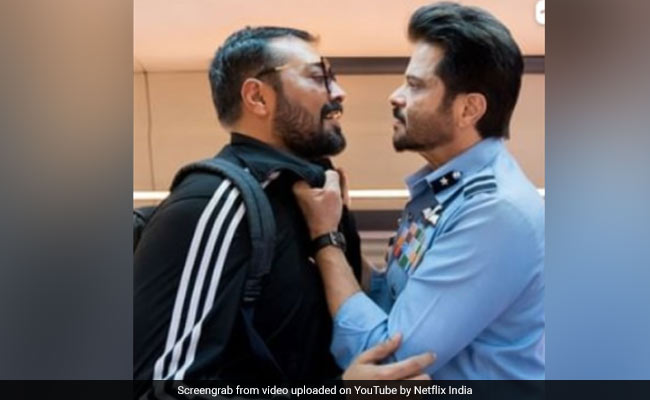 AK Vs AK Review: A still from the film. (courtesy YouTube )

An off-the-wall two-hander that bends a whole bunch of Bollywood rules, AK vs AK is unclassifiable fare. For the sake of convenience, let us call it is a mockumentary where a hostage thriller meets a madcap caper that swivels ceaselessly in a manner that we did not know was within the realms of possibility in a Hindi movie.

The film opens in a veteran movie star's vanity van. A 'persona non grata' director sneaks in and broaches a grotesque idea for a movie. It's the actor's birthday and he is late for a family get-together. But the supplicant is in no mood to take no for an answer. That is precisely what AK vs AK is like: so way-out that it has no no-go areas.

The Netflix original film, directed by Vikramaditya Motwane, blurs the line between reality and fiction. Enduring Hindi movie star Anil Kapoor (AK) and independent cinema maverick Anurag Kashyap (AK) play themselves and take swipes at each other in a trippy actor-director tussle that is, for all intents and purposes, an extended in-joke. The action unfolds in the course of one night - December 24, Kapoor's birthday.

The rollercoaster encounter, filmed fly-on-the-wall style, centres on the kidnapping of Kapoor's daughter Sonam (who puts in an appearance along with brother Harshvardhan, who laments the harm Motwane's BhaveshJoshi Superhero has done to his career and hopes Kashyap will help reverse his fortunes with Bhavesh Joshi 2).

Kashyap, a director humiliated in public by Kapoor, is out to settle scores. He conjures up a script that involves a race against time to find and rescue the hostage before sunrise, all to be filmed in real time. Kapoor is beside himself with rage but the danger that his daughter is in compels him to play along.

With the passing of each hour, tension mounts and the despairing father gets down and dirty on the streets of Mumbai. The filmmaker-within-the-film and his camerawoman (Yogita Bihani, who we see only fleeting because she is behind the camera) can barely contain their glee as the Bollywood luminary pulls out the stops and sheds his inhibitions, unmindful of the pitfalls ahead of him.

In one scene, Kapoor is injured in a scuffle. He bleeds from a cut on the face. "Daniel Day-Lewis ho gaye," Kashyap quips. "There is blood." Need we emphasize that a weirder film than AK vs AK has never been made in Hindi? Scarface is referenced, Tarantino is mentioned, so is Scorsese, but AK vs AK is pure Bollywood notwithstanding how far adrift it is from Bollywood in terms of substance and style.

Elsewhere in the world, auteurs such as Alejandro Jodorowsky, Jim Jarmusch and Abbas Kiarostami have done meta experiments and produced cult films.

Around the turn of the millennium, Charlie Kaufman (a meta-movie past master) wrote Adaptation (directed by Spike Jonze) to record the creative struggles he faced in the process of adapting Susan Orlean's unfilmable nonfiction book The Orchid Thief. Nicholas Cage played Kaufman and his fictional twin brother, while Meryl Streep was Orlean.

Thirty years ago, Kiarostami made Close-Up, a documentary and fiction hybrid on the real-life trial of a film buff who impersonated Mohsen Makhmalbaf and conned a family into believing that they would be cast in his film. The Iranian director had actual people, including the accused, play themselves.

Of the 11 vignettes that made up Coffee and Cigarettes (2003), Jarmusch got a few of the cast members - Cate Blanchett, Steve Coogan, Alfred Molina and Bill Murray - to play versions of themselves. And can anyone beat Jodorowsky (as The Alchemist), at the end of the surreal The Holy Mountain (1973), say, "Zoom back, camera!", reveal the shooting equipment, the lights and the crew, and instruct everyone, including the audience, to return to the "real world".

The candid camera plays a key role in AK vs AK, and we are always aware that we are watching a film within a film. Everything is staged and yet feels all too real. The permeability across the two zones of perceptions is high in both directions. Kashyap pokes fun at Kapoor - the dig smacks of ageism - by suggesting that his Mera naam hai Lakhan days are long gone and mimicking an doddering old man.

Not only does Kapoor, a little later in the film, turn the clock back and dance to the same number, he is also rock steady despite all the running he has to do. In contrast, Kashyap, over a decade and a half Kapoor's junior and an asthmatic in real life, is frequently out of breath and in need of an inhaler.

It isn't only personal facts such as the above that inform the film. The careers and films of both Kapoor and Kashyap (he is once mistaken for his brother, the maker of Dabangg) are constantly referenced. Nobody knows you even in Wasseypur, Kapoor needles Kashyap. The latter pokes fun at Kapoor's Nayak: The Real Hero posturing. The play on 'real' is constant. At one point in the film, Kashyap preens that Kapoor should be thankful to him for helping him rise above all the 'fake' acting he has done in his career.

Director Motwane (given his hard-to-slot body of work, best suited for an experiment as freakish as this), writer Avinash Sampath and cinematographer Swapnil Sonawane (who gives the film dizzying fluidity) stay out of the frame. This is, therefore, a meta-movie that is not a meta-movie in the strictest sense of the term.

AK vs AK tracks a clash between two contrasting movie cultures and two distinct periods of Hindi cinema. The ever-likeable Kapoor, a star from the pre-social media era, is an unabashed and proud commercial movie man whose career has been built on box office successes. Kashyap, in contrast, is a product of the restless age of Twitter, the pugnacious spearhead of a new millennial brand of independent Hindi films that draw sustenance from critical applause.

The riotous, infectious, anything-goes spirit of AK vs AK stems in large part from Kapoor's spirited plunge into the material that puts his life, career and children in full public view. For the seasoned actor, it's a leap of faith clearly grounded in the joy of adventure. He acts in AK vs AK, but is he really acting? That question assumes significance because everything in the film is for real without really being real.

When Kashyap comes up with his crazy plan, he tells Kapoor that everything in the proposed film will be real - the search for the hostage, the pain, the tears. He mentions laughter in the same breath and stops short. You will not laugh, he says.

AK vs AK has the looks at times of a film made for a lark. There is consistent good humour inherent in the joust between two known industry personalities from different ends of the Bollywood spectrum flogging each other's personal and professional sore points. Kashyap's sounding-board presence is enhanced by the fact that he is also the dialogue writer adding spice to the exercise.

He is, like he is to many in real-life, the agent provocateur who drives the senior actor round the bend by roping him into an experimental idea that is fraught with risk. AK vs AK touches upon the broad themes of stardom and fame, of the lot of filmmakers who play by their own rules, of the difference between insiders and outsiders in an industry where one's surname and family ties do matter, and of the tangible and the make-believe.

On the acting front, Anil Kapoor is, well, Anil Kapoor. He does not hold back one bit. His vigour rubs off on the film. Anurag Kashyap, who has to huff and puff to keep pace, is the confrontational observer who cannot afford to take his eye off the ball. There comes a point in the film when the script begins to get the better of him. He captures the bafflement of a director who is losing control of his handiwork to perfection.

AK vs AK is a wild, wacky shot in the dark. It could have been a disaster had the brains behind it did not know what they were up against. That certainly isn't the case. The film's self-awareness borders on the staggering.

All things considered, AK vs AK is a minor miracle. It's worth embracing with all our might. It is Hindi cinema's Halley's Comet. It is unlikely we will see anything like this ever again.