From Malaika Arora To Trolls Who Call Her 'Desperate' For Dating Younger Arjun Kapoor: 'Take A Flying...'

"The age difference doesn't really pop up when you are in a relationship," said Malaika Arora 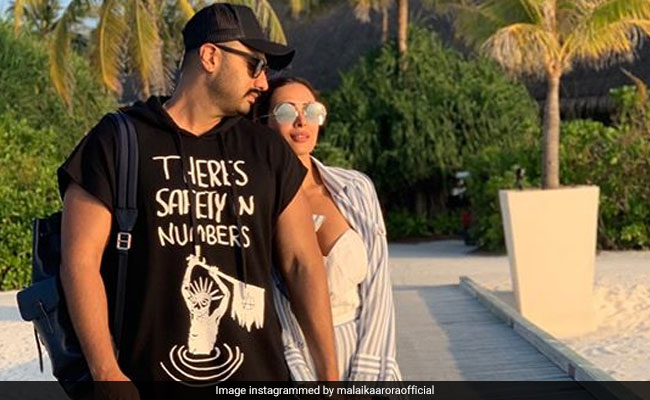 After making it Instagram official with Arjun Kapoor, actress Malaika Arora opened up about her love life in an explosive interview with HT Brunch and particularly addressed her stance on trolls commenting on her age difference with Arjun. "The age difference doesn't really pop up when you are in a relationship. It is about two minds and hearts connecting. Unfortunately, we live in a society that refuses to progress with time. An older man romancing a younger girl is hailed everywhere, but when the woman is older, she's called 'desperate' and a 'buddhi'. For people who think like this, I have just one line: Take a flying f***," was Malaika response, quoted HT.

Malaika Arora, 45, and Arjun Kapoor, 34, have never really confirmed their relationship status in as many words but made it apparent in their recent interviews and media interactions. On Arjun's birthday last week, Malaika Instagrammed a loved-up photo with the 2 States actor for the first time and wrote: "Happy b'day my crazy, insanely funny and amazing Arjun. Love and happiness always." Arjun Kapoor has also been spotted bonding with Malaika's son (with ex-husband Arbaaz Khan) in Mumbai.

When asked about Arhaan's take on her equation with Arjun, Malaika told HT: "I believe the best way to approach any situation is with honesty. It's important to tell your near and dear ones what's happening in your life and then give them time and space to understand and process things. We have had that conversation and I am so glad that everyone is in a much happier and more honest space today."

Malaika Arora and Arjun Kapoor often feature in gossip columns for reports over an impending wedding, about which the model actress refused to comment but did not really deny the possibility: "It's really personal."

Arjun Kapoor and Malaika Arora were recently spotted in New York together.