From Dynamite To MIC Drop: Top 10 BTS Songs To Play On Loop 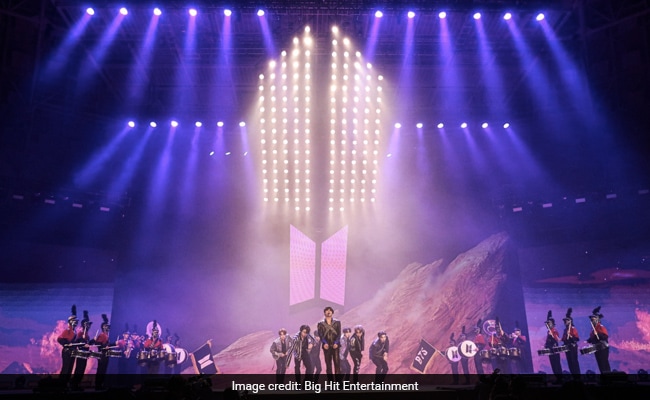 How much BTS craze is too much BTS craze? Fans will say there is no such thing as too much and we agree with them. As Rohit Khilnani's exclusive interview with the K-pop band aired on NDTV on Friday, we have prepared a list of top 10 BTS songs that will definitely sweep you off your feet. The band, comprising V, Jin, J-Hope, Suga, RM, Jimin, and Jungkook as its members, has been winning hearts since 2013 with its top-notch music albums and singles. From Dynamite and Boy With Luv to Spring Day and MIC Drop, BTS has shown every time that perfect combination of mind-blowing choreography, soulful lyrics and of course, OTT fashion trends is enough to drive the BTS A.R.M.Y crazy.

BTS has come a long way since releasing its debut album - 2 Cool 4 Skool - in 2013. In the past 7 years, the K-pop band won numerous awards, swept the charts, especially Billboard, and took the world by storm with their hit albums.

So, BTS A.R.M.Y, what are you waiting for? Check out the top 10 songs of the band here:

The song, which released in August this year, granted BTS their first No. 1 hit on the Billboard Hot 100 and secured its place for three non-consecutive weeks on the list. It is the first single of the band that has been entirely sung in English. Dynamite's success can be measured from the fact that within three months of its release, it has been nominated for MTV Europe Music Award for the Best Song, People's Choice Award for the Favorite Music Video and People's Choice Award for the Favorite Song. Dynamite has a retro vibe. The edgy and upbeat discography mixed with peppy tunes and candy colours-themed set makes the track a treat for the eyes.

BTS' Blood Sweat And Tears is just another example of the group's stunning artistry. The song, released in October 2016 as the lead single from the band's album Wings, won the Mnet Asian Music Award for the Best Dance Performance, as well as the Soompi Award for the Song Of The Year in 2016. It is a tropical house song that gives a new meaning to love. It shows one's willingness to throw everything on the line for love, even if it means committing a sin.

BTS is unbeatable when it comes to bops, without a doubt. Their song Fake Love proves it very well. The track, which is a single from their album Love Yourself: Tear, released in May, 2018. It has garnered several awards till now, including MTV Video Music Award Japan for the Best Group Video - International, Myx Music Award for the Favorite International Video and Mnet Asian Music Award for Global Fan's Choice. It is a hip hop, electropop song which relies on rock instrumentals. The song focuses on the message that if you're not true to yourself, your love won't last forever. Fake Love was also listed among top 10 songs on the Billboard Hot 100 chart in 2018.

Boy With Luv is BTS' record-breaking track featuring American singer Halsey. The track, which is the lead song from the band's album Map Of The Soul: Persona, broke three YouTube record when released - most viewed YouTube video in 24 hours, most viewed YouTube music video in 24 hours and most viewed YouTube music video in 24 hours by a K-pop group. At the time of its release, it also became the fastest video to hit 100 million views on YouTube. Boy With Luv has won the MTV Video Music Award for the Best K-Pop, Melon Music Award for the Song Of The Year and the Mnet Asian Music Award for the Best Music Video. The catchy upbeat track is the upgraded version of BTS' 2014 song Boy In Luv. It's about a boy and his journey towards self-discovery and self-love.

Spring Day dominated Billboard and Melon's charts for a significant time after it was released in February, 2017. The track, in which BTS introduced a whole new level of aesthetics, is about being far away from your loved ones but hoping that things will eventually get better. Spring Day won the Best Song of the Year award at the 2017 Melon Music Awards and the Best Music Video at the 2017 Mnet Asian Music Awards.

If there's someone who knows how to play with vibrant colours in a visually pleasing way, it's BTS. The K-pop band's DNA is all about love. The track was listed on the Billboard Hot 100 in 2017. It even won the Melon Music Award for the Best Music Video in 2017. The group's brilliant discography and amazing use of GFX in DNA will totally blow your mind.

In Fire, released in May, 2016, the band members delivered some of their most impressive rap to date. Fire serves as the title track of BTS' album The Most Beautiful Moment In Life: Young Forever. Fire is one of BTS' top 5 music videos to reach over 400 million views on YouTube. The K-pop band's stellar choreography in the track fetched the group the Soompi Award for the Best Choreography in 2016. BTS topped the Billboard World Digital Songs chart in 2016 with the single.

There's nothing ordinary about MIC Drop. It is BTS' magnum opus. BTS first released MIC Drop as part of their EP - Love Yourself: Her. The band then released a remix version of the song by Steve Aoki. The new version was released as a single for American radio and it just took the world by storm. The song peaked at No 28 on the US Billboard Hot 100 in 2017. MIC Drop (remix) even remained on the Billboard's World Digital Song Sales Chart for 100 weeks.

Another one of BTS' songs to secure a position in top 10 on the Billboard Hot 100 chart is On, which also topped the Billboard's Digital Sales chart this year. The song, released in February, won the MTV Video Music Award for the Best K-Pop, as well as the Best Pop. A separate version of the song from the album Map Of The Soul: 7 also featured Australian singer Sia, who is known for her hit tracks like Cheap Thrills, Chandelier and Alive. On is about BTS' seven-year-long journey together.

So, from the aforementioned 10 songs, which one is your favourite? Tell us in the comments section.